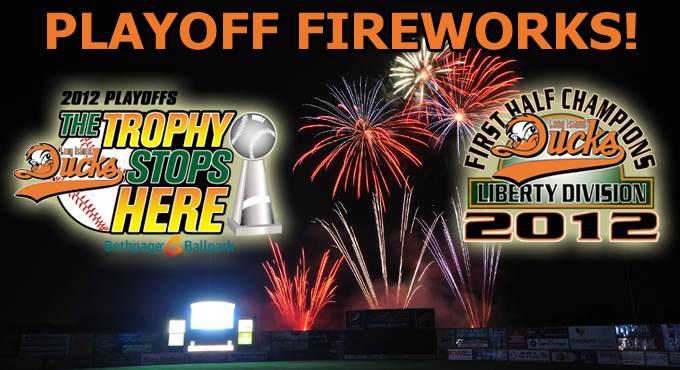 (Central Islip, N.Y., Aug. 15, 2012) – The Long Island Ducks announced today that at the conclusion of Games Three and Four of the Liberty Division Championship Series and Games Three and Four of the Atlantic League Championship Series during the 2012 playoffs, all fans in attendance will be treated to a Grucci Fireworks Extravaganza. CLICK HERE to secure your seats for the postseason.

All fireworks extravaganzas at Bethpage Ballpark are performed by the world famous Grucci Family of Long Island, a long-time partner of the Ducks. The fireworks will add to the excitement at the ballpark as the 2012 First Half Liberty Division champions chase their second Atlantic League title in franchise history.

Now, your business can join the Ducks in the Championship Chase by sponsoring a postseason game at the Duck Pond. With thousands in attendance enjoying every Grucci Fireworks Extravaganza this season, the playoffs are an opportunity to gain great exposure for your business while supporting your hometown team. For more information, please call (631) 940-DUCK.

Individual tickets for the 2012 playoffs are on sale now. Fans can purchase their tickets by visiting the Bethpage Ballpark Box Office, calling 631-940-TIXX, or visiting www.liducks.com and clicking on the tickets icon at the top of the page.