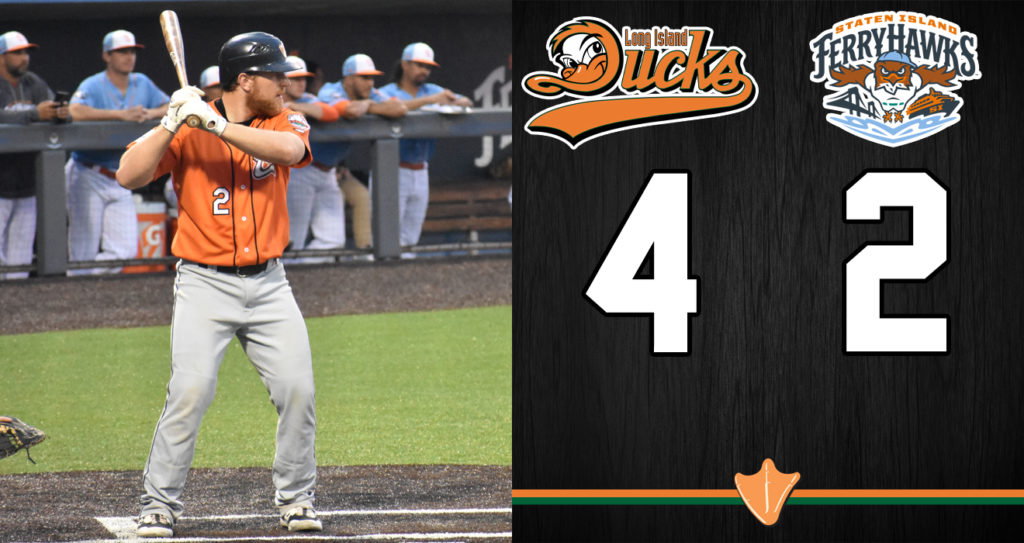 Staten Island jumped out in front 1-0 against Long Island starter Akeel Morris in the second inning courtesy of a sacrifice fly off the bat of Andres Noriega that plated Ricardo Cespedes. The FerryHawks made it 2-0 in the third when Dilson Herrera scored from third on an error committed by Ducks shortstop Vladimir Frias off a ground ball hit by Angel Aguilar.

Long Island scored four times in the fifth versus FerryHawks starter Nick Carrell to take a 4-2 advantage. Joe DeCarlo’s bases loaded walk got the scoring started for the Flock which enabled Alejandro DeAza to cross the plate. Dustin Woodcock followed with a sacrifice fly to left field, scoring Sam Travis, who singled earlier in the frame. The Flock took the lead as Vladimir Frias drove in Rusney Castillo with an RBI single, and Phil Caulfield followed with a run-scoring double that plated DeCarlo.

Morris (4-4) picked up the victory, allowing two runs (one earned) on six hits over six innings pitched, walking two and striking out six. Carrell (0-3) was tagged with the loss, surrendering four runs on six hits in five innings on the mound, walking four while striking out a pair. Nick Goody closed things out in the ninth for his fourth save of the season.

De Aza, DeCarlo and Frias led the way offensively with two hits each.

Long Island returns home on Friday night to begin a three-game set with the York Revolution. Game time is slated for 6:35 p.m., with the Fairfield Properties Ballpark gates opening at 5:35 (5:20 for full season ticket holders). Following the game, all fans in attendance will be treated to a Fireworks Spectacular, presented by the Suffolk County PBA. It’s also an Angela’s Pizza Friday! A player on the Revolution will be designated as the K-Man, and if he strikes out during the game, all fans can show their game ticket to enjoy a special offer throughout the rest of the weekend at Angela’s Pizzeria of Islip. Right-hander Anderson DeLeon (3-1, 3.49) gets the start against Revolution righty Jorge Martinez (5-4, 3.11).