CLICK ON THE ICONS ABOVE FOR MORE INFORMATION ON SPECIFIC TYPES OF SPONSORSHIP,
OR CALL (631) 940-3825 TODAY FOR MORE ABOUT MARKETING YOUR BUSINESS WITH THE DUCKS.

ABOUT THE LONG ISLAND DUCKS

Where do Long Islanders flock to every summer? A league-record 8.5 million+ fans have seen Ducks baseball in Central Islip since April, 2000. The Ducks have led the Atlantic League in attendance 16 times, the most in league history, and boast an all-time average attendance of 5,542 fans per game in 6,002-seat Fairfield Properties Ballpark (92% capacity).

In 1,551 all-time openings, there have been 699 sellouts and in 2019, Long Island became the quickest North American professional sports franchise to reach the magical 8-Million Fan mark with a stadium the size of the Ducks' ballpark.

WHAT THE LONG ISLAND DUCKS OFFER YOUR ORGANIZATION

With 5,000+ fans exposed to your name in a relaxed, fun atmosphere for three hours each game, the Ducks offer a captive audience. Exposing fans to your company also helps drive them from our park to your locations. We play America's Game and we're Long Island's home team; an association that is sure to reflect positively on your organization.

Long Island is home to more than three million people. The Island ranks fourth among 321 metro areas in household income and employs 1.1 million people. According to a recently conducted demographic study:

~ 75 percent of fans are between the ages of 25 and 54.
~ 68.5 percent are parents.
~ 83 percent attend games with their families.
~ 76 percent are college educated, with over 60 percent having at least a bachelor's degree.
~ 100 percent said they would recommend going to a game to a friend or family member.

Over 80 percent of season tickets and sponsorship partners have renewed their involvement annually. These are the loyal customers you want!

The following map indicates the location of the Ducks season ticket and 10-game mini plan holders across Long Island: 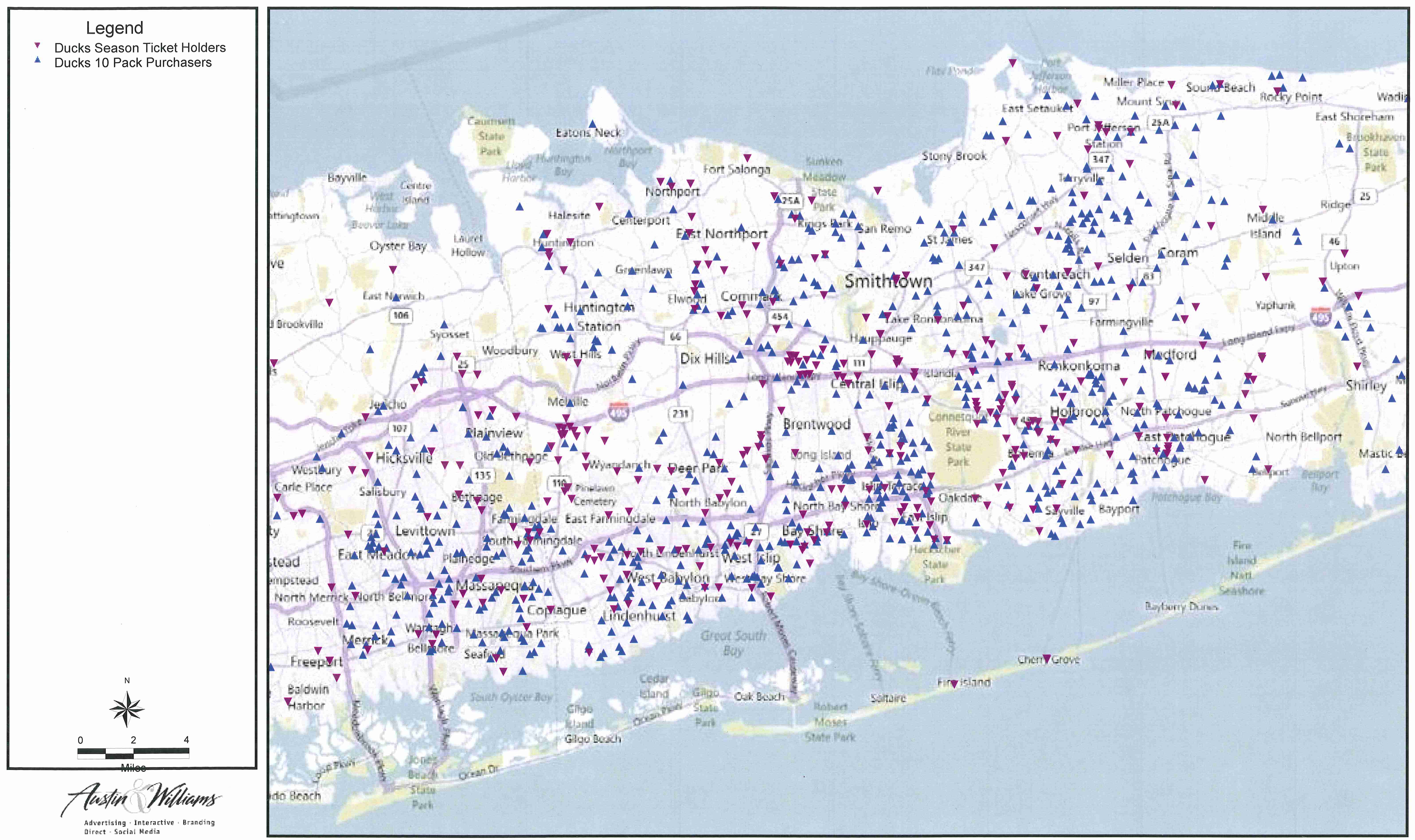