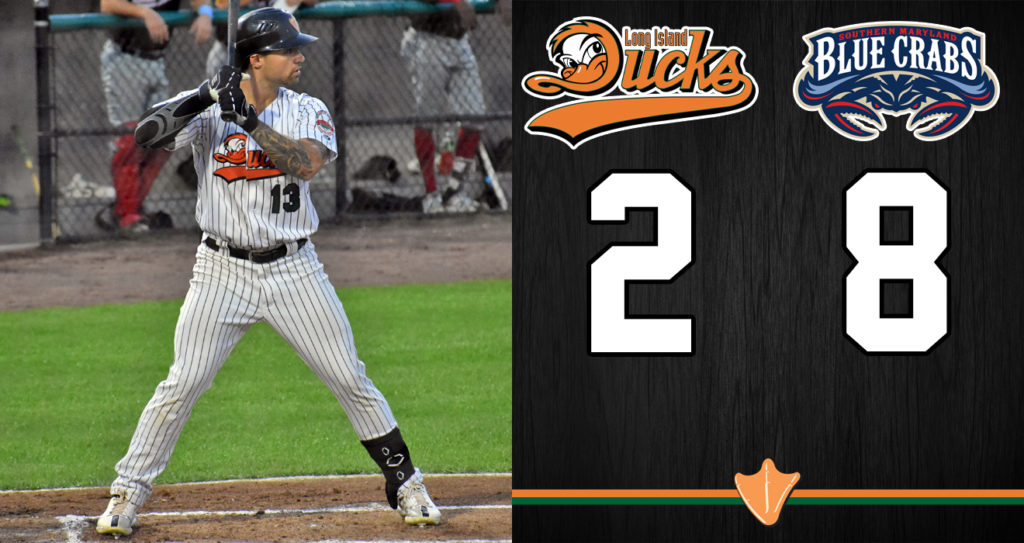 (Central Islip, N.Y., Sept. 15, 2022) – The Long Island Ducks were defeated by the Southern Maryland Blue Crabs 8-2 on Thursday night in the rubber game of a three-game series and final home game of the 2022 season at Fairfield Properties Ballpark.

The Blue Crabs opened the scoring in the first inning on a sacrifice fly from David Harris and a throwing error by Ducks starter Chris Cepeda that scored Michael Wielansky. Deibinson Romero’s RBI single to left field in the bottom of the first off Blue Crabs starter Daryl Thompson closed the gap to 2-1. However, Michael Baca’s sac fly to center in the second and Zach Collier’s RBI triple to center in the third pushed Southern Maryland’s advantage to 4-1.

It stayed that way until the seventh when the Blue Crabs added two runs on Harris’ RBI single to left and Joe DeLuca’ sac fly to left. Back-to-back two-out RBI doubles by Jack Sundberg and Wielansky in the eighth made it an 8-1 game. Jose Sermo rounded out the scoring with a long solo homer to right in the bottom of the ninth.

Thompson (15-4) earned the win with six innings of one-run ball, allowing eight hits and a walk while striking out two. Cepeda (5-2) took the loss, giving up six runs (four earned) on eight hits and four walks over six and one-third innings with one strikeout.

The Ducks finished the 2022 season by welcoming 285,888 fans through the gates of Fairfield Ballpark, an average of 4,538. Both totals led all MLB Partner Leagues this year, marking the second consecutive season in which the Ducks led in both categories. Long Island also increased their total attendance figure by 61,768 fans and their average attendance figure by 536 fans from 2021.

The Ducks hit the road on Friday night to begin their final series of the regular season against the Staten Island FerryHawks. First pitch is scheduled for 7:00 p.m. at Staten Island University Hospital Community Park. Fans can follow all the action on the Long Island Ducks Broadcast Network. Live streaming HD video and audio will be available via BoxCast on LIDucks.com as well as on the Ducks official Facebook page and YouTube channel. Right-hander Chris Pike (0-0, 5.14) gets the start for the Ducks against a FerryHawks starter to be determined.