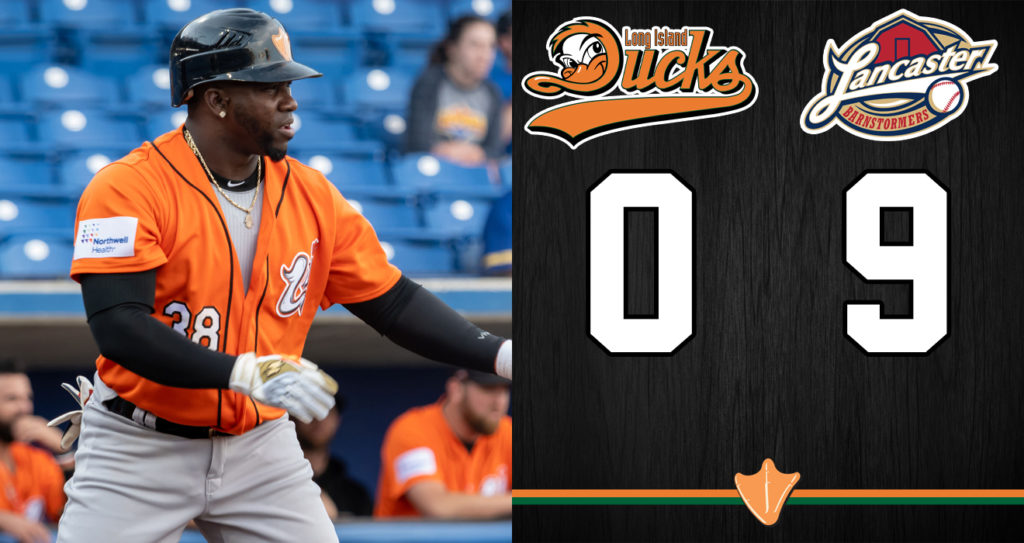 (Lancaster, Pa., May 11, 2022) – The Long Island Ducks were defeated by the Lancaster Barnstormers 9-0 on Wednesday night in the middle game of a three-game series at Clipper Magazine Stadium.

It stayed that way until the seventh when Lancaster added four more runs. RBI singles by Andretty Cordero and Feliz along with two Ducks errors did the damage. An RBI fielder’s choice off the bat of Cordero in the eighth rounded out the scoring.

The Ducks and Barnstormers wrap up their three-game series on Thursday morning. First pitch is scheduled for 11:00 a.m. at Clipper Magazine Stadium. Fans can follow all the action on the Long Island Ducks Broadcast Network. Live streaming HD video and audio will be available via BoxCast on LIDucks.com as well as on the Ducks official Facebook page and YouTube channel. Left-hander Cody Beckman (1-0, 0.00) toes the rubber for the Ducks against Barnstormers southpaw Augie Sylk (0-3, 8.71).

Long Island returns home on Friday, May 13, to begin a three-game set with the High Point Rockers. Game time is slated for 6:35 p.m., with the Fairfield Properties Ballpark gates opening at 5:35 (5:20 for full season ticket holders). It’s an Angela’s Pizza Friday! If the K-Man on the Rockers strikes out during the game, fans will be able to redeem their game ticket for a $13 regular pie (normally $19) at Angela’s Pizzeria in Islip during the rest of the weekend. Tickets for the game, and all Ducks games, are available by visiting the Fairfield Properties Ballpark box office, calling (631) 940-TIXX or CLICKING HERE.