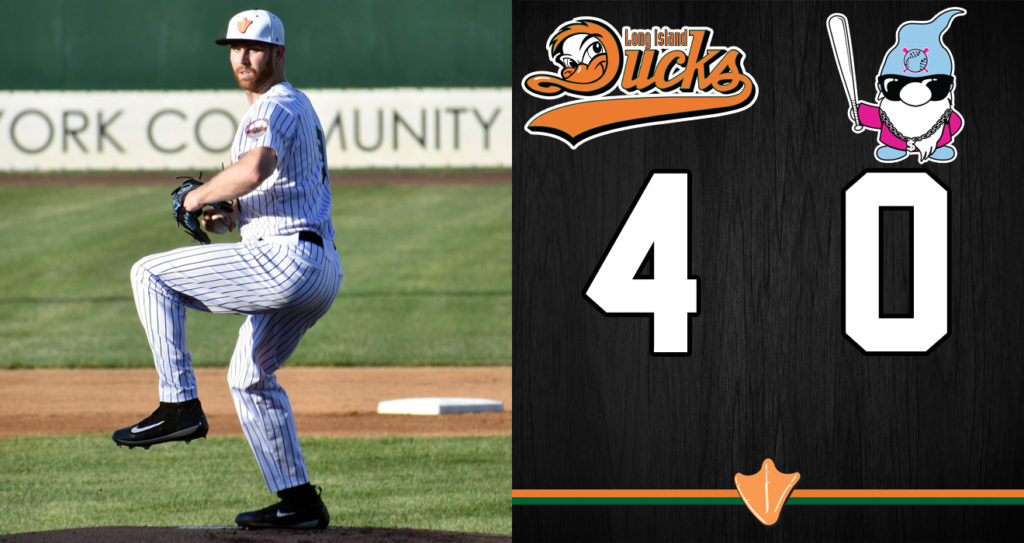 (Central Islip, N.Y., June 17, 2022) – The Long Island Ducks shut out the Wild Health Genomes 4-0 on Friday night in the opener of a three-game series at Fairfield Properties Ballpark.

The Ducks struck first with a three-run fourth inning against Genomes starter Elih Villanueva. RBI singles by Alejandro De Aza and Deibinson Romero, along with an RBI double by Sam Travis, did the damage. It stayed that way until the bottom of the seventh when the Ducks pushed across their fourth run on a bases loaded walk by De Aza.

That was plenty for Ducks starter Scott Harkin (4-4) to earn the win. The righty tossed six scoreless innings, allowing five hits and a walk while striking out seven. Villanueva (3-5) took the loss, conceding four runs on eight hits and a walk over six and two-thirds innings with 10 strikeouts. Tyler Webb tossed a 1-2-3 ninth inning, striking out one, to end the ballgame.

Travis led the Flock offensively with two hits, an RBI and a run scored. De Aza added a hit, two RBIs, a run and a walk.

The Ducks and Genomes continue their three-game set on Saturday night. Game time is slated for 6:35 p.m., with the Fairfield Properties Ballpark gates opening at 5:35 (5:20 for full season ticket holders). Following the game, all fans in attendance will be treated to a Fireworks Spectacular, presented by Jovia Financial Credit Union. It’s also a Lucky Seat Saturday, presented by Long Island MacArthur Airport. During the game, the Ducks will be selecting a lucky fan in the ballpark, who will win a free roundtrip for two to any of Breeze Airways’ 28 destinations. Right-hander Anderson DeLeon (2-1, 3.59) takes the mound for the Ducks against Genomes lefty Robby Scott (3-4, 5.65).