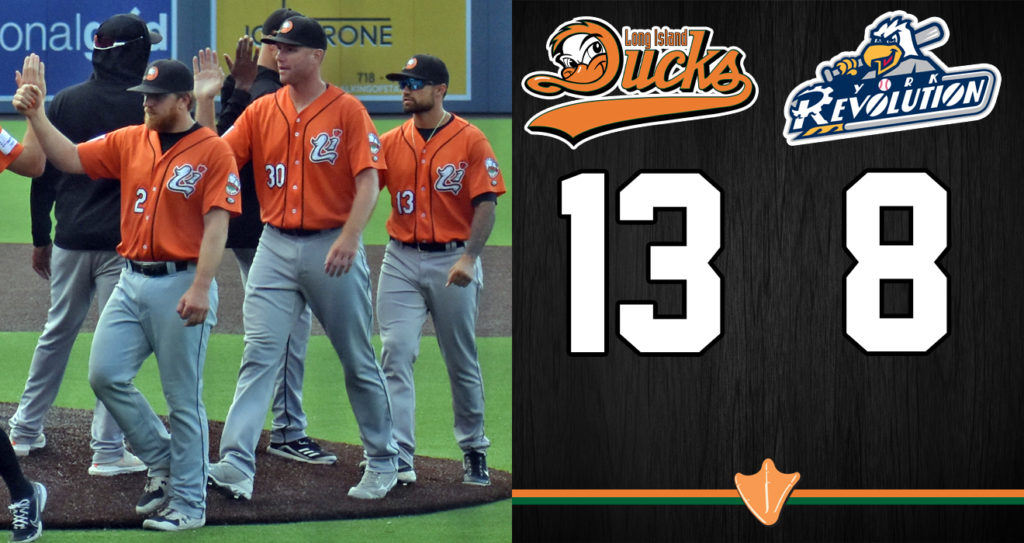 (York, Pa., September 8, 2022) – The Long Island Ducks defeated the York Revolution 8-3 on Thursday evening in the final game of a four-game series at Peoples Bank Park.

Long Island took a 2-0 lead in the top of the first inning versus York starting pitcher Josh Norwood thanks to a run-scoring groundout produced by Deibinson Romero that plated L.J. Mazzilli after he doubled with one away and an RBI base knock off the bat of Trevor Achenbach that drove in Alejandro De Aza who reached on an infield single earlier in the frame. York tied the ballgame at two in the last of the first against Ducks starter Chris Cepeda courtesy of a two-run base hit from Melky Mesa and jumped out in front 3-2 in the second on Troy Stokes’ sacrifice fly.

The Flock sent nine men to the plate in the third, scoring six tines to open an 8-3 advantage, highlighted by bases loaded walks issued to Achenbach and Zach Racusin, and a grand slam home run to right center off the bat of Dustin Woodcock, his second four-bagger in as many nights.

Carrying an 8-7 cushion into the sixth, the visitors scored three big insurance runs for an 11-7 advantage with Achenbach plating Mazzilli with a base hit for his third rib-eye steak of the ballgame and Racusin driving home a pair of his own with a single that scored Romero and Achenbach. Long Island finished the scoring out in the ninth frame thanks to an RBI infield single by pinch-hitter Phil Caulfield that scored Mazzilli and a wild pitch that enabled Caulfield to hustle down the line from third bast to give the game its final score of 13-8.

Cepeda registered a no-decision after giving up five runs on eight hits (two home runs) in three and two-thirds innings on the mound, walking four and striking out two. Patrick Quinn (1-0) collected the win in relief, allowing two runs on one hit (one home run) in one and one-third innings of work, walking and striking out one. (Norwood (0-1) suffered the loss, surrendering seven runs on five hits in two and one third innings pitched, walking five and striking out two. Mazzilli, Romero, Jose Sermo, Achenbach, and Joe DeCarlo each had two hits en route to the victory.

Long Island returns home on Friday night to begin a three-game series against the Staten Island FerryHawks. Game time is slated for 6:35 p.m., with the Fairfield Properties Ballpark gates opening at 5:35 (5:20 for full season ticket holders). The first 1,500 fans in attendance will receive QuackerJack and Scoop Posters, courtesy of Newsday. It’s also an EBBS Craft Beer/Fountain Hard Seltzer Takeover at the ballpark and an Angela’s Pizza Friday! Right-hander Chris Pike (0-0, 9.00) gets the start for the Ducks against FerryHawks left-hander Augie Sylk (5-10, 5.57).