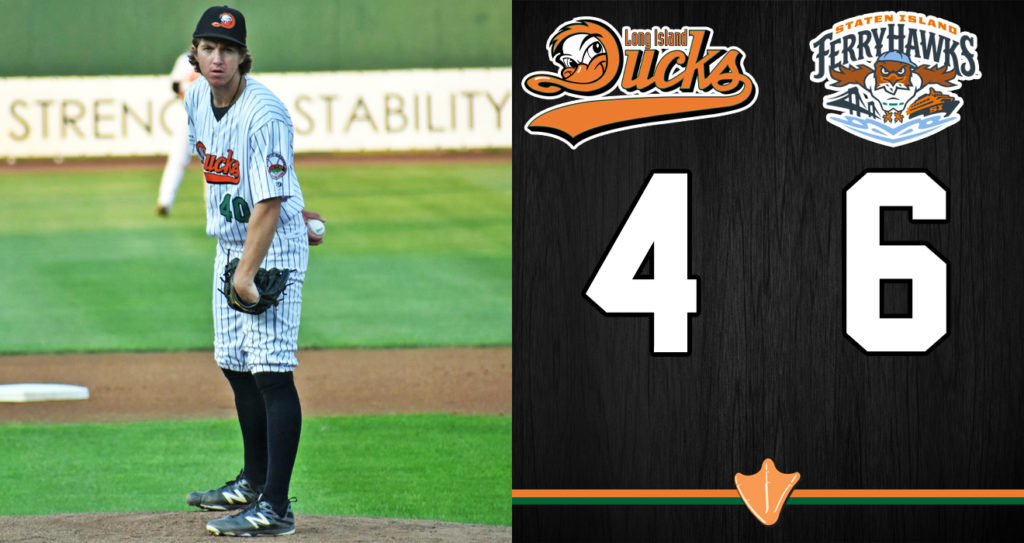 (Central Islip, N.Y., Sept. 9, 2022) – The Long Island Ducks were defeated by the Staten Island FerryHawks 6-4 on Friday night in the opener of a three-game series at Fairfield Properties Ballpark.

L.J. Mazzilli gave the Ducks an immediate 1-0 lead with a leadoff solo home run to left field off FerryHawks starter Augie Sylk in the bottom of the first inning. Staten Island responded with a pair of two-out runs off Ducks starter Chris Pike in the second on RBI singles by Javier Betancourt and Antoine Duplantis. Long Island tied the game at two in the third on Alejandro De Aza’s RBI fielder’s choice and went in front 3-2 in the fourth on a double play ball that scored Jose Sermo.

The FerryHawks evened the game at three in the fifth on Ricardo Cespedes’ RBI single to right, but the Ducks reclaimed the lead in the bottom of the inning when Mazzilli stole home on a double-steal. An RBI single to center by Angel Aguilar in the seventh tied the game at four, and a two-run home run to right by Ramon Osuna in the eighth put Staten Island ahead 6-4.

Neither starter factored into the decision. Pike tossed six innings of three-run ball, allowing six hits and four walks while striking out three. Sylk lasted five innings, giving up four runs (three earned) on three hits and three walks with six strikeouts. Jordan Simpson (2-3) picked up the win after tossing two scoreless innings of relief, walking one and striking out one. Chas Cywin (0-1) took the loss, surrendering two runs on two hits and a walk in one and two-thirds innings. Victor Capellan earned his 20th save of the season with a scoreless ninth, working around a hit and a walk.

The Ducks and FerryHawks continue their three-game set on Saturday night. Game time is slated for 6:35 p.m., with the Fairfield Properties Ballpark gates opening at 5:35 (5:20 for full season ticket holders). Following the game, all fans in attendance will be treated to a Fireworks Spectacular, presented by Forte Construction and TAP Electric. It’s also a Lucky Seat Saturday, presented by Long Island MacArthur Airport, and a Lemonade Stand at Main & Vine Wine Down Saturday. Right-hander James Varela (1-1, 4.89) takes the mound for the Ducks against FerryHawks righty Dylan Castaneda (1-0, 3.60).