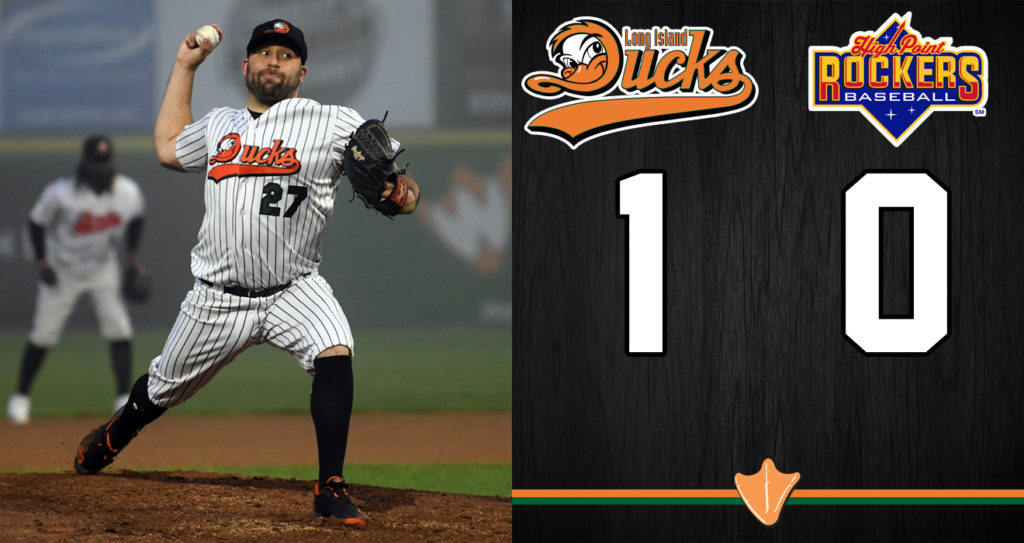 (Central Islip, N.Y., May 13, 2022) – The Long Island Ducks shut out the High Point Rockers 1-0 in a fog-shortened game on Friday night in the opening game of a three-game series at Fairfield Properties Ballpark.

Neither side manufactured a run until the bottom of the fifth inning when Deven Marrero doubled to right-center and later scored on a wild pitch by Rockers starter Justin Nicolino. The game then went into a fog delay after the completion of the sixth inning and was eventually called.

Ducks starter Brett Kennedy (1-1) earned the win, tossing five and two-thirds scoreless innings, allowing three this and three walks while striking out eight batters. Nicolino (3-1) suffered the loss, giving up a run on four hits and a walk over six innings with three strikeouts. Anderson DeLeon picked up his first season after recording the final out of the sixth inning, stranding the bases loaded.

The Ducks and Rockers continue their three-game set on Saturday night. Game time is slated for 6:35 p.m., with the Fairfield Properties Ballpark gates opening at 5:35 (5:20 for full season ticket holders). Following the game all fans will be treated to a Fireworks Spectacular. It’s also a Lucky Seat Saturday, presented by Long Island MacArthur Airport. During the game, the Ducks will be selecting a lucky fan in the ballpark, who will win a free roundtrip for two to any of Breeze Airways’ 28 destinations. Right-hander Akeel Morris (0-0, 5.52) takes the mound for the Ducks against Rockers righty Jheyson Manzueta (0-1, 2.20).