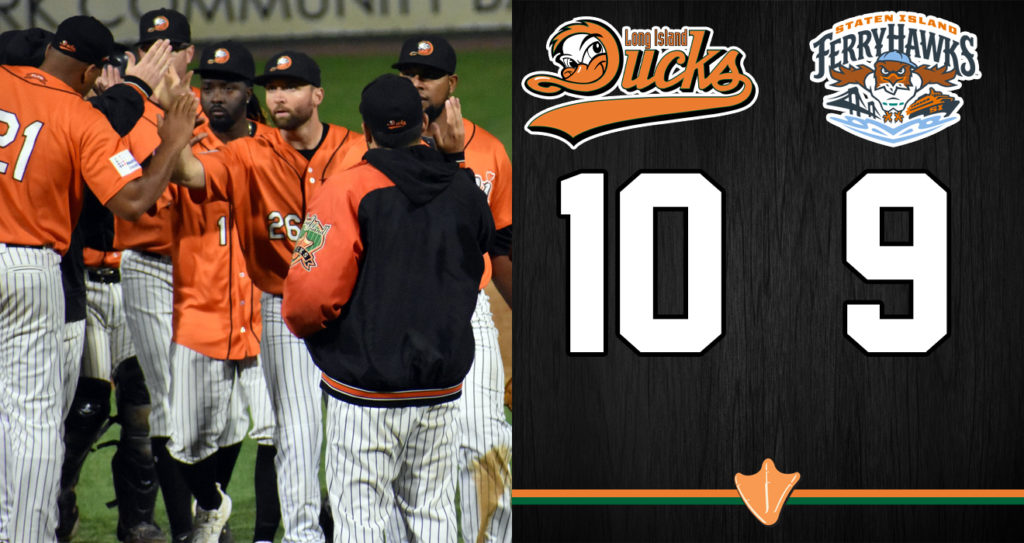 (Central Islip, N.Y., May 18, 2022) – The Long Island Ducks defeated the Staten Island FerryHawks 10-9 on Wednesday night in the middle game of a three-game series at Fairfield Properties Ballpark.

The Ducks offense then erupted for 10 runs in the bottom of the fourth, including six off FerryHawks starter Anthony Rodriguez, to take a 10-6 lead. RBI singles by Alejandro De Aza and Rusney Castillo, a two-run single by Deven Marrero, and three-run home runs by Johnni Turbo and Sam Travis did the damage.

The FerryHawks closed to within a run on a run-scoring error in the fifth and RBI singles by Alfredo Reyes and Liriano in the seventh. However, Sandy Baez and Tyler Webb pitched 1-2-3 innings in the eighth and ninth to preserve the win.

Neither starter factored into the decision. Tarpley lasted two and two-thirds innings, giving up three runs on three hits and a walk with one strikeout. Rodriguez pitched three innings, conceding six runs (five earned) on seven hits and two walks. Dylan Peiffer (1-0) picked up the win, yielding one unearned run on one walk in one and one-third innings. Eddy Reynoso (1-2) took the loss, allowing four runs on four hits in one inning. Webb earned his fourth save with a perfect ninth inning.

The Ducks and FerryHawks wrap up their three-game set on Thursday night. Game time is slated for 6:35 p.m., with the Fairfield Properties Ballpark gates opening at 5:35 (5:20 for full season ticket holders). It’s a Thirsty Thursday at the ballpark! Fans will be able to enjoy a special buy one, get one half-price offer on all EBBS beer products and Fountain Hard Seltzer throughout the game. Right-hander Brett Kennedy (1-1, 3.51) toes the rubber for the Ducks against FerryHawks (0-2, 19.29).