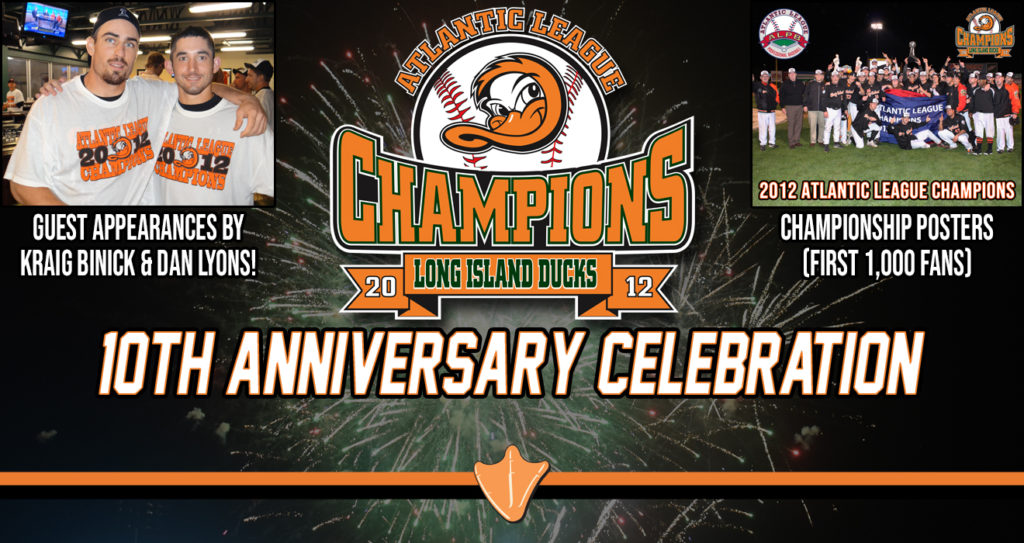 (Central Islip, N.Y., June 28, 2022) – The Long Island Ducks today announced the team will host a 10th Anniversary Celebration of its 2012 Atlantic League championship during their game against the York Revolution on Saturday, July 2.

“Our run to the championship in 2012 is one of the most memorable stories in Atlantic League history,” said Ducks President/GM Michael Pfaff. “On this milestone anniversary of that incredible season, we look forward to welcoming back some distinguished alumni and celebrating their accomplishments.”

In attendance at the Ducks game on July 2 will be two integral parts of the 2012 championship team. They include shortstop Dan Lyons, who was named the 2012 Championship Series Most Valuable Player after his walk-off bunt single in the bottom of the ninth inning in Game Five won the title for Long Island, and outfielder Kraig Binick, a native of Hicksville, N.Y., who was an Atlantic League All-Star in 2012 and batted .405 during the playoffs that year. Lyons will throw out a ceremonial first pitch to Binick prior to the game.

In addition, the first 1,000 fans in attendance will receive a 2012 Atlantic League Champions Poster. This commemorative keepsake features a photo of the team on the field immediately after winning the title, hoisting the championship trophy and championship flag. Prior to the game, highlights from the team’s run to the championship will be featured on the DuckVision video board in left-center field.

To cap off the celebration, all fans in attendance will be treated to a Postgame Fireworks Spectacular, presented by Fairfield Properties. It’s also a Lucky Seat Saturday, presented by Long Island MacArthur Airport. During the game, the Ducks will be selecting a lucky fan in the ballpark, who will win a free roundtrip for two to any of Breeze Airways’ 28 destinations. To be eligible for the prize, please sign up prior to the end of the third inning at the Ducks Ticket Kiosk on the main concourse. The winner is scheduled to be announced during the game.

Fans can purchase tickets for the July 2 game, and every Ducks home game, by CLICKING HERE. Tickets can also be purchased by visiting the Fairfield Properties Ballpark box office or calling (631) 940-TIXX.