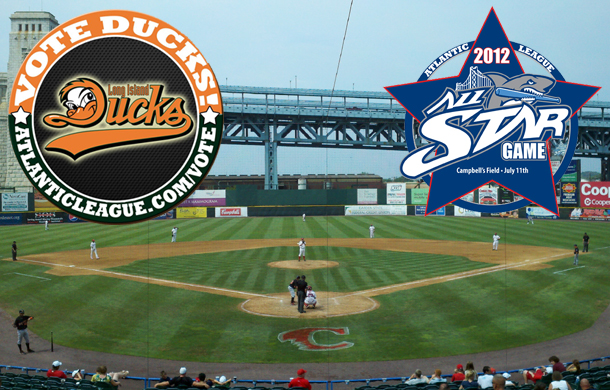 Vote your favorite Ducks to the 2012 Atlantic League Midsummer Classic
(Central Islip, N.Y., June 14, 2012) – Atlantic League officials announced that fan balloting for the 2012 Atlantic League All-Star Game is now underway. The game will be played at Campbell’s Field, the home of the Camden Riversharks, on Wednesday, July 11 at 7:05 p.m.
Voting for the 2012 All-Star Game will run through Tuesday, July 3 at noon, and fans can cast their ballots online at www.atlanticleague.com/vote. Fan voting will determine the position players for the Freedom and Liberty Division squads, while coaches, management, and media will determine the pitchers. Fans will also have the opportunity to “write-in” a candidate for each division.
Last season, the Ducks had a league-high eight players representing the Liberty Division at the All-Star Game, which was played in York, Pennsylvania. J.R. House, Javier Colina, Kraig Binick, Matt Esquivel, John Rodriguez, Mike Loree, Mike Parisi and Ehren Wassermann were all chosen.
Fans wishing to attend the All-Star Game and other surrounding events can CLICK HERE for further information. Fans interested accommodations for the All-Star Game are encouraged to call the Hotel ML reservations hotline and mention the All-Star game at (877) 494-2626. Rooms must be booked by the 25th.
The Long Island Ducks are members of the Atlantic League of Professional Baseball and play their home games at Bethpage Ballpark. For further information, call (631) 940-DUCK or visit www.liducks.com.
###