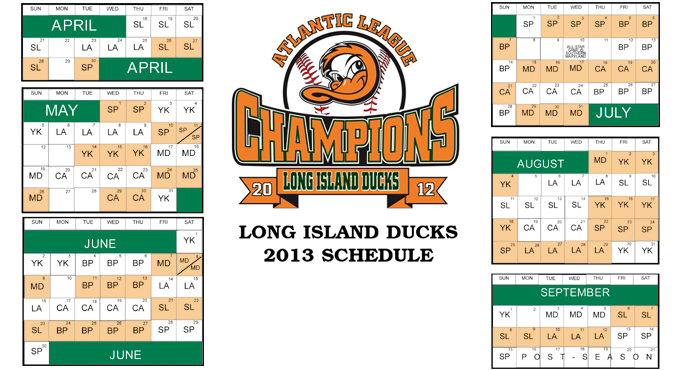 (Central Islip, N.Y., Oct. 29, 2012) – The 2012 Atlantic League champion Long Island Ducks announced the dates and times for the 2013 season today. The Ducks will begin their 14th season of play in the Atlantic League of Professional Baseball and look to become the third team in league history to win back-to-back Atlantic League Championships.

“The support of our fans was instrumental during our Championship run in 2012,” said Ducks President and General Manager Michael Pfaff. “We hope to see everyone back at Bethpage Ballpark cheering on Long Island’s hometown team in 2013.”

The 2013 season will feature a 140-game schedule that begins on April 18 as the Ducks open a four-game series against the Sugar Land Skeeters in Texas. Long Island then heads to Pennsylvania for an Atlantic League Championship Series rematch with the Lancaster Barnstormers. The home opener will feature a championship ring ceremony and the raising of the 2012 Atlantic League Championship Flag on Friday, April 26 at 7:05 p.m. against Sugar Land.

Fans will be treated to 20 games against the cross-sound rival Bridgeport Bluefish, including 10 match-ups during the month of June. The first rematch of the 2012 Liberty Division Championship Series against Southern Maryland Blue Crabs will take place on the road Friday, May 17, with the Blue Crabs coming to the Duck Pond a week later. During the second half, the Barnstormers’ will make their first visit of the year to Bethpage Ballpark August 26-29.

The league’s best players will take the field at Regency Furniture Stadium in Waldorf, Maryland for the Atlantic League All-Star Game on Wednesday, July 10. Both halves of the season will be 70 games long, with the first half ending on Monday, July 1 and the season concluding on Sunday, September 15.

Game times will remain unchanged for the 2013 season. During April, May, June and September, Monday through Thursday games will begin at 6:35 p.m., with Friday and Saturday games starting at 7:05 and Sunday contests beginning at 1:35. In July and August, Monday through Saturday games will start at 7:05 p.m., with Sunday games getting underway at 5:05. The 2013 promotional schedule will be released in March prior to the Opening Day of individual ticket sales.