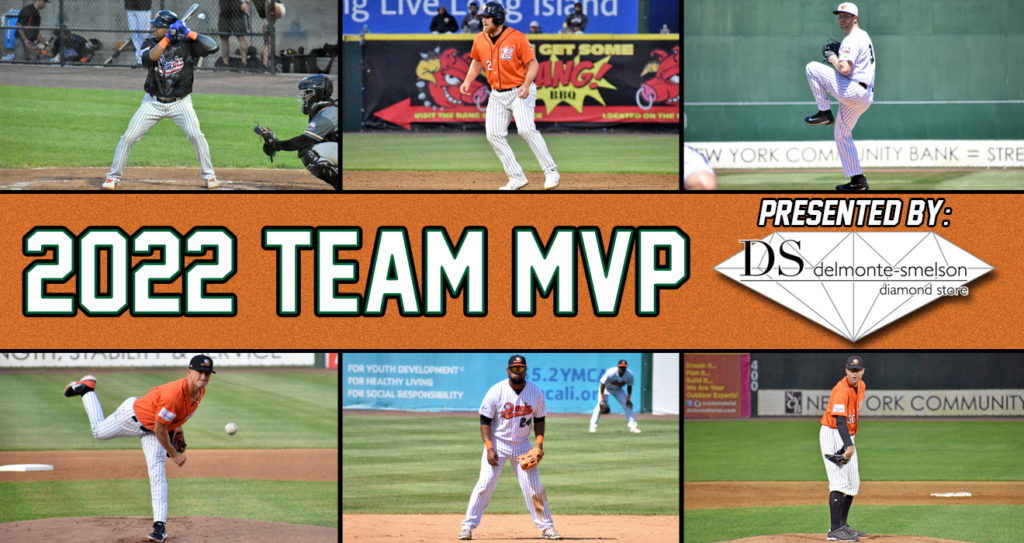 (Central Islip, N.Y., Sept. 1, 2022) – The Long Island Ducks and Delmonte-Smelson Jewelers have teamed up to present the 2022 Long Island Ducks MVP Award. Fans were able to vote once per day through Wednesday, September 14th, for the Duck they believe should be this year’s Most Valuable Player.

The player with the most fan votes will receive a commemorative gift from Delmonte-Smelson Jewelers prior to the Ducks game against the Southern Maryland Blue Crabs on Thursday, September 15th, which is Fan Appreciation Day, presented by Coca-Cola.

The following are this year’s nominees, listed alphabetically by last name (stats through August 31):

De Aza has been one of the Atlantic League’s top players in his first season with the Flock. The outfielder leads the league in on-base percentage at .442. He is also second in the league in batting average (.335), tied for fourth in the league in doubles (29) and fifth in OPS (.945). Entering September, he leads all Ducks players in hits (112) and runs scored (67) in addition to batting, on-base percentage, OPS and doubles. The 10-year MLB veteran was named the league’s Co-Player of the Month for July after leading the circuit in hits (43) and doubles (14) during the month. De Aza has committed just four errors in the outfield all season.

DeCarlo has done a fine job at the plate in his first season with Long Island. The backstop has played in 102 games, good for third on the Flock, and has posted a .300 batting average. Additionally, he has launched six home runs, his highest total since clubbing eight in 2018 with the Arkansas Travelers (AA, Mariners). He currently ranks fourth on the team with 149 total bases and has the second-most hits of any player to spend the entire season with the Ducks (104). DeCarlo has totaled 47 RBIs, 60 runs, 21 doubles, three triples and 49 walks this season.

Harkin has been in the starting rotation throughout his first full season and second overall with the Ducks. He is tied for the team lead in wins (9) and innings pitched (112.2) while ranking third in strikeouts (79). His 4.63 ERA is also the best among qualified Ducks starting pitchers this season. Harkin has walked just 26 batters all season long, averaging 2.1 walks per nine innings. The righty’s best month came in June when he compiled a 2.48 ERA across five starts.

Iorio has split time as both a reliever and starter in his third season with the Flock. The righty began the season in the bullpen, going 3-0 with a 1.84 ERA before moving into the starting rotation. Overall, he is tied with Harkin for the team lead in wins (9) while ranking second behind Harkin in ERA among Ducks qualified starters (4.64). His 106.2 innings of work are good for third-most on the team, and he has walked 37 batters while striking out 68. In nine games (two starts) during the month of May, Iorio went 3-0 with a 3.20 ERA.

Romero has been a steady contributor offensively throughout the course of his third season with Long Island. The third baseman ranks second in the Atlantic League with a .423 on-base percentage, trailing only De Aza. He is also third in the league in walks (80) and ninth in OPS (.906). The Dominican Republic native leads all Ducks players with 16 home runs and 69 RBIs while ranking second in total bases (168) and fourth in doubles (20). Romero is currently on a 22-game on-base streak going back to August 6th. Since the start of the second half, he has posted a .313 batting average.

Webb has done a fine job out of the bullpen in his first season with the Ducks. The five-year MLB veteran is tied for fifth in the Atlantic League with 46 appearances and tied for sixth in the league with 12 saves. He has compiled a 3.50 ERA on the season and leads all Ducks relief pitchers with 60 strikeouts. Webb has totaled seven holds this season and has walked just 12 batters while conceding 24 runs (18 earned). The southpaw was dominant in June and July, combining to allow just one run in 22 relief appearances, spanning a total of 21.2 innings. Webb made 14 consecutive scoreless appearances from May 31 to July 7 and 18 straight appearances without allowing an earned run from May 22 to July 7.