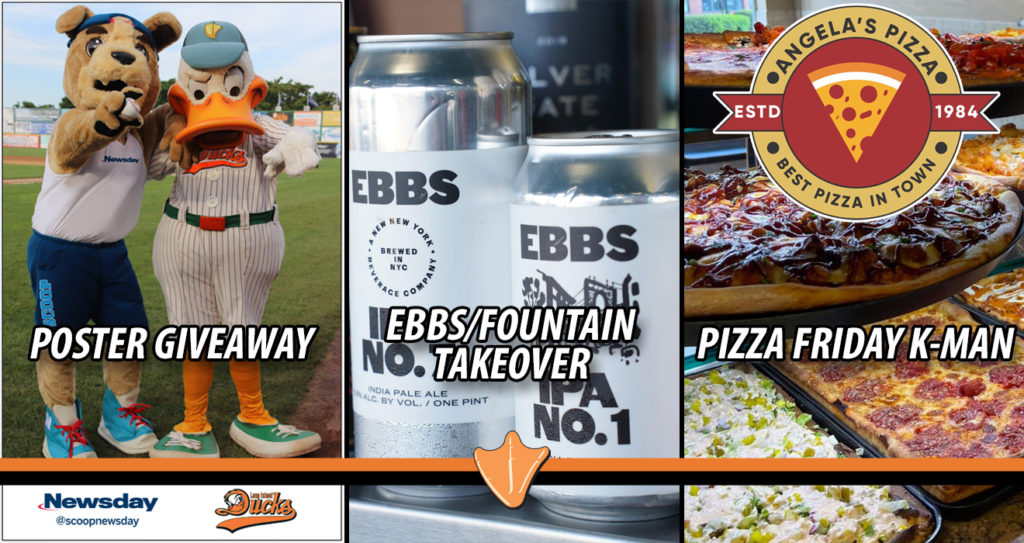 The Long Island Ducks return home tonight to open a three-game series against the Staten Island FerryHawks. Right-hander Chris Pike gets the start for the Ducks against FerryHawks lefty Augie Sylk. CLICK HERE to get tickets!

Game time is slated for 6:35 p.m., with the Fairfield Properties Ballpark gates opening at 5:35 (5:20 for full season ticket holders). The first 1,500 fans in attendance will receive QuackerJack and Scoop Posters, courtesy of Newsday.

It’s also an EBBS Craft Beer/Fountain Hard Seltzer Takeover at the ballpark! Fans can enjoy a special buy one, get one half-price offer on EBBS and Fountain products at the ballpark throughout the ballgame. The Duck Club restaurant/bar will also be open for all fans to enjoy.

It’s an Angela’s Pizza Friday as well! A player on the FerryHawks will be designated as the K-Man. If he strikes out during the game, all fans can show their game ticket to enjoy $10 regular pies (normally $19) throughout the rest of the weekend at Angela’s Pizzeria of Islip. Additionally, all fans can show any Ducks game ticket during the 2022 season at Angela’s to receive 10% off their order.

It’s also an Unused Ticket Day! Fans who were unable to make it out to a ballgame earlier this season and are still in possession of their unused tickets can exchange them for tickets of equal or lesser value at the Fairfield Properties Ballpark box office, subject to availability.

Tickets to the game, and all Ducks home games, are available by visiting the Fairfield Properties Ballpark box office, calling (631) 940-TIXX or by CLICKING HERE. Those unable to make the game can also follow all the action on the Long Island Ducks Broadcast Network. Live streaming HD video and audio will be available via BoxCast on LIDucks.com as well as on the Ducks official Facebook page and YouTube channel.