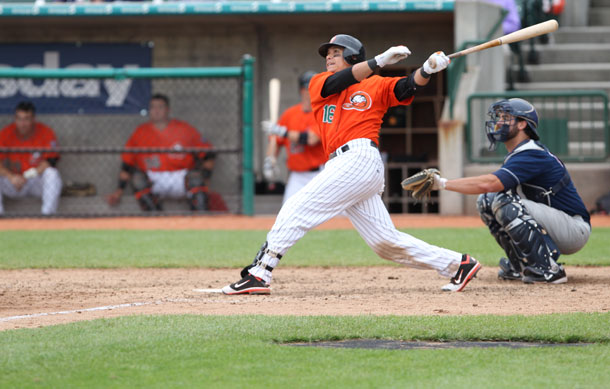 (Central Islip, N.Y., Feb. 7, 2012) –The Long Island Ducks today announced the signing of infielder Ray Navarrete, who becomes the fourth Duck to sign in 2012. The Port Washington resident returns for a franchise record seventh season with the Ducks and 13th in professional baseball.

“We are excited to have Ray join us for another season,” says Ducks president/general manager Michael Pfaff. “He has been a great player for our franchise, and we hope to see him assist our drive to the championship this season.”

Navarrete begins the year as the Ducks’ all-time franchise leader in hits (719), home runs (112), RBI (420), runs scored (485), and doubles (174), and he remains just three games shy of tying Justin Davies for the most games played in franchise history (637). He has been selected to play in the Atlantic League All-Star Game a team-record four times and was named the 2009 Atlantic League MVP.

The 33-year-old clubbed a team-high 27 home runs in 2011 (second in the Atlantic League), totaled 79 RBI (sixth), and scored 86 runs (third). Navarrete also finished among the top five in games played (122 – second) and at-bats (492 – second). His efforts led to him being voted the “Best Long Island Duck” in this year’s Long Island Press “Best of Long Island 2012” awards. Navarrete is a career .282 hitter over 1,320 professional games and has reached as high as Triple-A with the New York Mets organization in 2006. The New Jersey native was originally signed as a non-drafted free agent by the Pittsburgh Pirates in 2000.

The Long Island Ducks are entering their 13th season of play in the Atlantic League of Professional Baseball and have led the league in attendance in each of their first 12 seasons. Opening Day is May 4. For further information, please visit www.liducks.com or call (631) 940-3825.