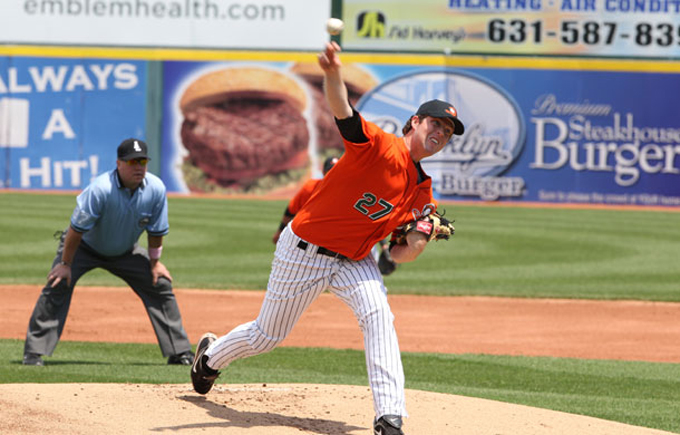 “Mike was the best pitcher in the league last season,” says Ducks President/General Manager Michael Pfaff. “We are happy to have him back in the rotation while adding three other talented players to our roster.”

Loree enters his sixth season of professional baseball in 2012.  The 27-year-old led the Atlantic League and set a Ducks franchise record with 14 wins and 131 strikeouts in 122 and two-third innings pitched. In addition, he led the league with a 1.98 ERA, earning him the pitching Triple Crown and Atlantic League Pitcher of the Year honors.

The New Jersey native was signed by the Pittsburgh Pirates in August of 2011 and fired seven and two-third innings while striking out 11 batters in four games with Double-A Altoona. For his minor league career, the Villanova alum owns a 33-27 record with a 3.82 ERA and 426 punch-outs in 480 and two-third innings pitched. Loree was originally drafted by the San Francisco Giants in the 50th round of the 2007 amateur entry draft.

Meloan joins the Ducks having spent parts of three seasons in the big leagues with the Dodgers, Indians, and Athletics. He made his Major League debut on September 1, 2007, earning his first strikeout in two innings of work. Overall, the 27-year-old has a 4.58 ERA with 20 strikeouts in 13 Major League contests.

The Texas native is a veteran of 188 minor league games (31 starts) and has a 16-19 career record with a 3.72 ERA and 433 strikeouts. His best year came in 2007 when he went 7-2 with a 2.02 ERA and 91 strikeouts in 66 and two-thirds innings of work with Double-A Jacksonville and Triple-A Las Vegas in the Dodgers organization. That season, the right-hander was named a Baseball America Second Team Minor League All-Star and Double-A All-Star. Meloan was drafted by the Dodgers in the fifth round of the 2005 amateur draft.

Graham will make his Ducks debut in his fifth season of professional baseball. He has spent time in two Major League organizations (Rockies and Indians), reaching as high as Double-A. His best season came in 2008 when he compiled 12 wins, good for third in the league, a 2.26 ERA, good for second in the league, and 138 strikeouts, good for fourth in the league, with Single-A Asheville. In 99 minor league games (57 starts), the right-hander holds a 24-19 record with a 2.99 ERA and 347 strikeouts. The Ohio native was originally drafted by the Rockies in the fifth round of the 2007 amateur draft.

Williams, the son of former Red Sox manager Jimy Williams, has spent four of his six seasons of professional baseball with the Tampa Bay Rays organization, reaching as high as Single-A. The switch-hitting 28-year-old spent all of last year with the Brockton Rox of the Can-Am Association and hit .316 in 69 games. A Florida native, Williams carries 372 games of minor league experience, posting a .286 batting average with 11 home runs and 137 RBI. Williams was originally drafted by the Astros in the 35th round of the 2002 amateur draft.