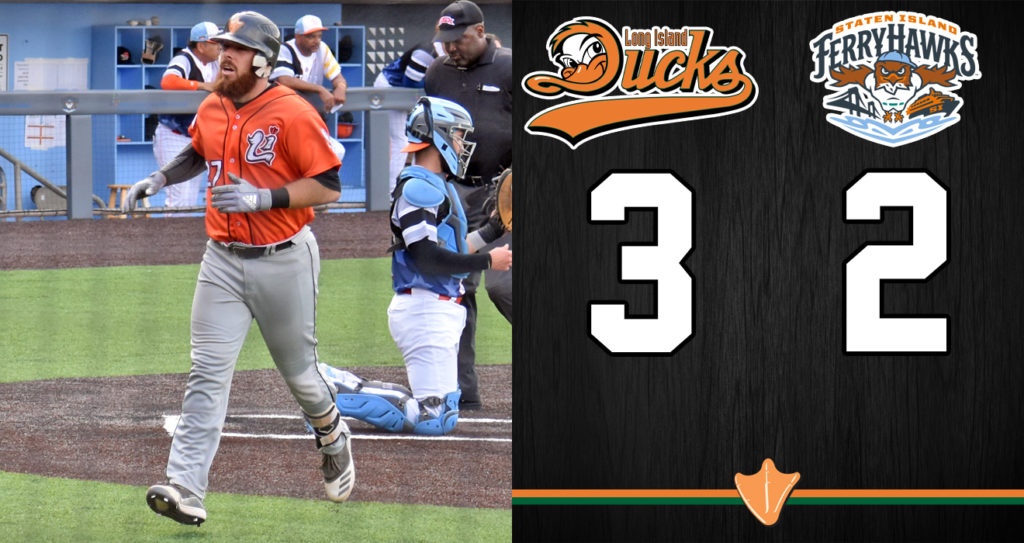 Both teams exchanged zeroes until the top of the seventh when Long Island scored a run. Deven Marrero went to third base on a flyout by Dustin Woodcock and scored on an error by Alfredo Reyes. Staten Island answered in the bottom of the frame with a pinch hit two-run single to left by Joseph Monge to go in front 2-1. Long Island reclaimed the lead for good in the eighth on a two-out, two-run home run to left field by Austin Rei.

Neither starter factored into the decision. Anderson DeLeon tossed six innings of two-run ball (one earned) for Long Island, allowing four hits and three walks while striking out eight. Nick Carell lasted five innings, yielding no runs on three hits and four walks with two strikeouts. Kai-Wei Lin (1-1) picked up the win despite giving up two hits in two-thirds of an inning. Williams Ramirez (0-1) took the loss, conceding two runs on two hits in one inning. Sandy Baez picked up his fifth save with a scoreless ninth, working around a hit and two walks.

The Ducks continue their road trip on Tuesday night when they open a three-game series with the High Point Rockers. First pitch is scheduled for 6:35 p.m. at Truist Point. Fans can follow all the action on the Long Island Ducks Broadcast Network. Live streaming HD video and audio will be available via BoxCast on LIDucks.com as well as on the Ducks official Facebook page and YouTube channel. Right-hander Akeel Morris (1-4, 6.07) gets the start for the Ducks against a Rockers starter to be determined.