BARNSTORMER BATS EVEN SERIES WITH DUCKS 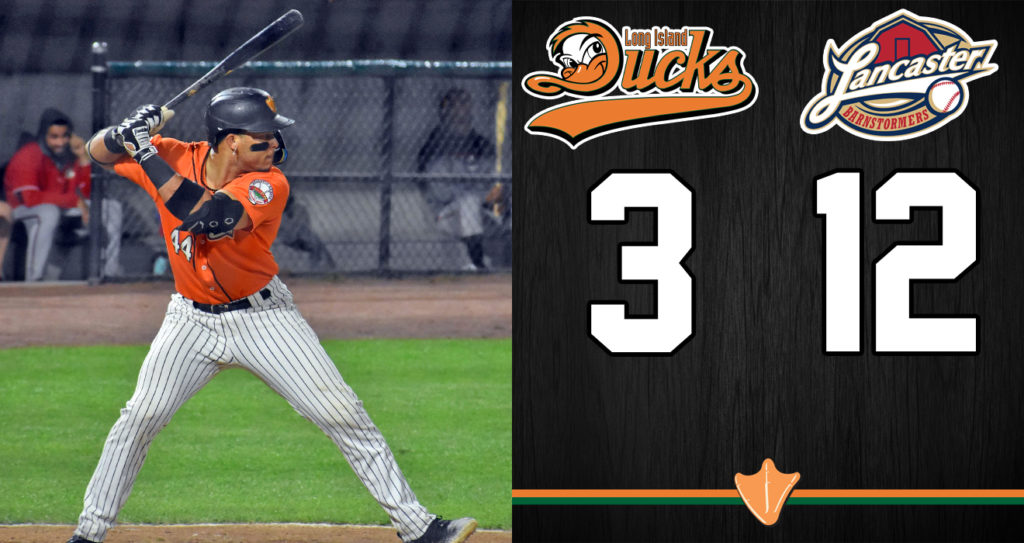 (Central Islip, N.Y., Aug. 31, 2022) – The Long Island Ducks were defeated by the Lancaster Barnstormers 12-3 on Wednesday night in the middle game of a three-game series at Fairfield Properties Ballpark.

An RBI single by Trace Loehr in the second inning gave Lancaster an early 1-0 lead. Then a five-run third inning against Ducks starter Rafael Monsion extended the visitor’s advantage to six. RBI doubles by Andretty Cordero and Anthony Peroni along with a two-run triple from Chris Proctor highlighted the inning.

Long Island stormed back with three runs in the third against Barnstormers starter Brooks Hall on L.J. Mazzilli’s sac fly to left and Carlos Castro’s two-run double to left-center. It stayed that way until the sixth when a two-out, two-run triple by Colton Shaver stretched the Barnstormers lead to 8-3.

A three-run seventh and another run in the eighth widened the gap to nine. Trayvon Robinson’s RBI double, Cordero’s two-run single and Jacob Barfield’s RBI single did the damage.

The Ducks and Barnstormers wrap up their three-game set on Thursday night. Game time is slated for 6:35 p.m., with the Fairfield Properties Ballpark gates opening at 5:35 (5:20 for full season ticket holders). The first 1,000 fans in attendance will receive Ducks Seat Cushions, courtesy of The Bristal Assisted Living. It’s also a Lemonade Stand at Main & Vine Wine Down Thursday! All fans will be welcome to visit the Duck Club restaurant/bar to enjoy a wine tasting event of featured products. Right-hander Joe Iorio (9-4, 4.64) toes the rubber for the Ducks against Barnstormers righty Oscar De La Cruz (8-2, 4.22).