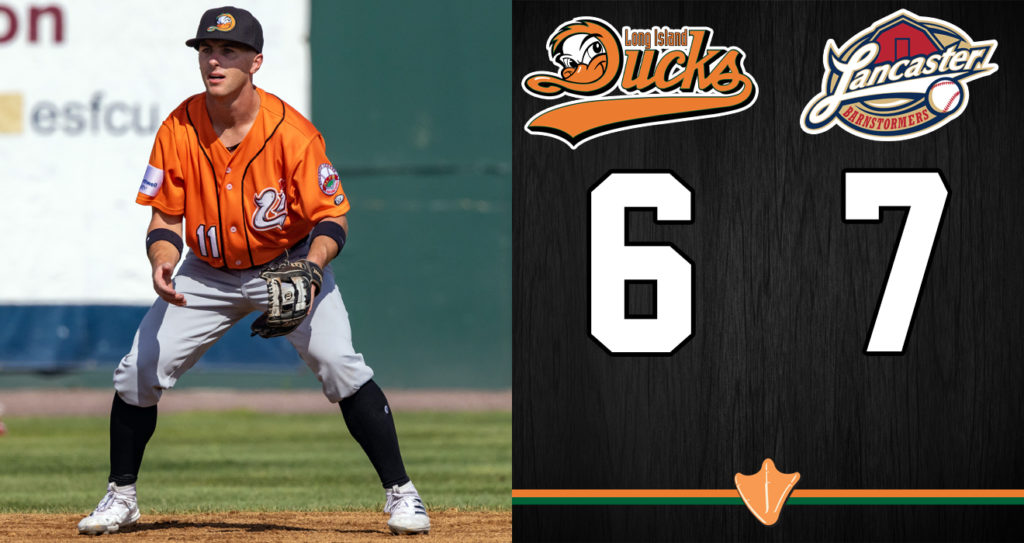 (Lancaster, Pa., Aug. 24, 2022) – The Long Island Ducks were defeated by the Lancaster Barnstormers 7-6 on Wednesday night in the middle game of a three-game series at Clipper Magazine Stadium.

Phil Caulfield led off the game with a solo home run to right field off Barnstormers starter Cameron Gann to give the Ducks an early 1-0 lead. The Barnstormers answered with two runs in the bottom of the first to take the lead on RBI singles from Andretty Cordero and Ariel Sandoval.

A three-run fourth inning put the Ducks back on top 4-2 Deibinson Romero’s RBI single, a bases loaded walk by Matt Chamberlain and a sac fly off the bat of Dustin Woodcock highlighted the inning. Anthony Peroni’s RBI single to right in the bottom of the inning closed the gap to one. However, the Ducks got the run back in the sixth when Anfernee Seymour beat out an infield single and Woodcock scored on a throwing error.

Jacob Barfield’s RBI single through the left side in the bottom of the sixth made it a one-run game again at 5-4. Lancaster tied the game in the eighth when Chris Proctor scored from third on a fly ball double play. The Ducks took the lead back in the ninth when L.J. Mazzilli scored on a sacrifice foul fly off the bat of Alejandro De Aza. However, a two-run single to left by Sandoval in the bottom of the ninth won the game for Lancaster.

Neither starter factored into the decision. Stephen Tarpley lasted just two batters, allowing a run on a hit. Gann lasted five innings, conceding four runs on four hits and four walks over five innings with seven strikeouts. West Tunnell (4-0) picked up the win despite allowing a run on three walks in the ninth. Webb (2-4) took the loss, conceding three runs on four hits and three walks in one and one-third innings.

Caulfield led the Flock offensively with two hits, an RBI, a run and a walk.

The Ducks and Barnstormers wrap up their three-game set on Thursday night. First pitch is scheduled for 6:30 p.m. at Clipper Magazine Stadium. Fans can follow all the action on the Long Island Ducks Broadcast Network. Live streaming HD video and audio will be available via BoxCast on LIDucks.com as well as on the Ducks official Facebook page and YouTube channel. Right-hander Akeel Morris (5-9, 5.82) toes the rubber for the Ducks against Barnstormers righty Brooks Hall (3-1, 2.39).