BARNSTORMERS SPREAD THE WEALTH IN TRIUMPH OVER DUCKS 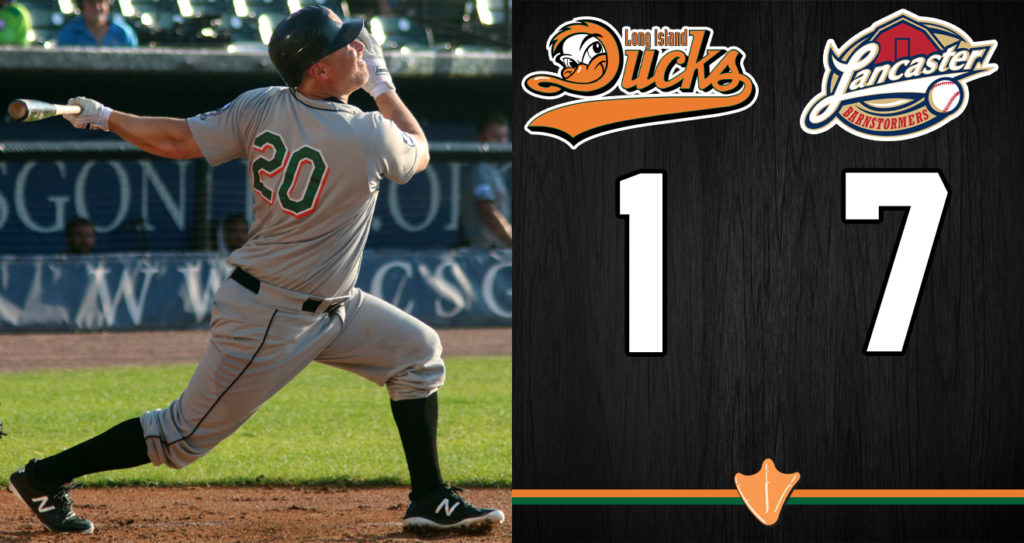 (Lancaster, Pa., August 10, 2022) – The Long Island Ducks were defeated by the Lancaster Barnstormers 7-1 on Wednesday night in the second game of a three-game midweek series from Clipper Magazine Stadium.

Long Island took a 1-0 advantage in the top of the third inning versus Lancaster starting pitcher Gray Fenter as Lew Ford reached on an infield single which allowed Phil Caulfield to score from second who hustled home on a missed catch error by Andretty Cordero at first base after Caulfield doubled with one man down earlier in the frame to extend his on base-streak to 13 consecutive games overall. Lancaster tied the game at one in the fourth against Ducks starter Sandy Baez courtesy of an opposite field solo home run to right center off the bat of Cordero.

The Barnstormers went ahead for good in the fifth 3-1 thanks to an RBI double from Melvin Mercedes and a run-scoring base knock produced by Cordero. The home team batted around in the seventh and added three insurance runs for a 6-1 cushion on a two-run single by Trace Loehr and another RBI two-base hit from Mercedes. Lancaster put the icing on the cake in the eighth as Jake Hoover cracked a solo four-bagger to right center to give the game its final score of 7-1.

Fenter (2-0) was the winner, allowing one run on five hits across five innings pitched, walking two while striking out six. Baez (3-3) suffered the loss, giving up two runs on six hits (one home run) over four and one-third innings of work, striking out two batters in the process. Ford and Alejandro De Aza had a pair of hits each in defeat.

The Ducks and Barnstormers wrap up their three-game set on Thursday evening. First pitch is scheduled for 6:30 p.m. at Clipper Magazine Stadium. Fans can follow all the action on the Long Island Ducks Broadcast Network. Live streaming HD video and audio will be available via BoxCast on LIDucks.com as well as on the Ducks official Facebook page and YouTube channel. Right-hander Ryan Meisinger (3-2, 5.29) gets the start for the Long Island against Lancaster righty Erik Manoah (3-1, 3.59).