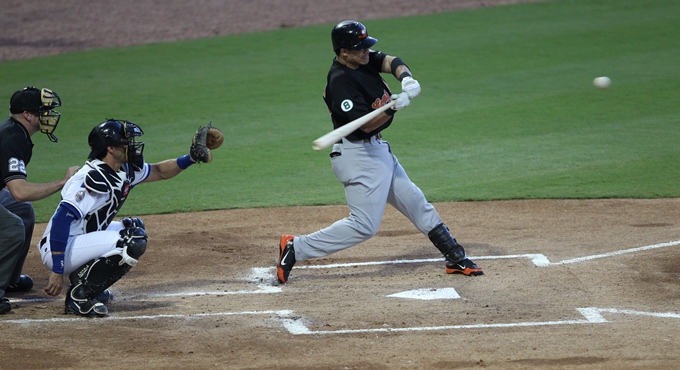 (Lancaster, Penn., July 6, 2012)
– The Long Island Ducks were defeated by the Lancaster Barnstormers 13-1 on Friday night in the second game of a four-game series.

Lancaster jumped out in front with a run in the first and three runs in the second off Ducks starter Dan Meyer. A RBI single by Terry Tiffee, a run-scoring wild pitch, a RBI single by Blake Galien, and a sac fly by Tommy Everidge did the damage. The Barnstormers would tack on four more runs highlighted by a Jamie Pedroza two-run home run.
The Ducks would get on the board with a RBI single by Josh Johnson off Lancaster starter Dwayne Pollok, but the ‘Stormers would answer right back with a RBI single by Tiffee and a solo blast by Everidge in the seventh to put the game out of reach.
Pollok (5-0) earned the win, going six innings allowing one run on seven hits and giving up just one walk. Meyer (2-5) was saddled with the loss, yielding six runs on five hits with four strikeouts in two and two-thirds innings.
Mitch Canham led the Flock with three hits, while Johnson provided the only RBI for the Ducks.
The Ducks and Barnstormers continue their four-game set on Saturday night. Game time is slated for 7:00 p.m., at Clipper Magazine Stadium. Fans can follow the action live on the radio at MyCountry 96.1 FM and online at LIDucks.com by clicking the Listen Live icon on the homepage. Right-hander Nick Singleton gets the start for the Ducks against Lancaster righty Alan Johnson.
Long Island returns home on Thursday, July 16 as they host the Somerset Patriots in the opener of a four-game set. First pitch is set for 7:05 p.m., with the Bethpage Ballpark gates opening at 6:05. The first 1,500 fans in attendance will receive Foam Fingers, courtesy of People’s Alliance Federal Credit Union. Tickets for the game and all Ducks home games are available by visiting the Bethpage Ballpark Box Office, calling (631) 940-TIXX, or visiting www.liducks.com.
###