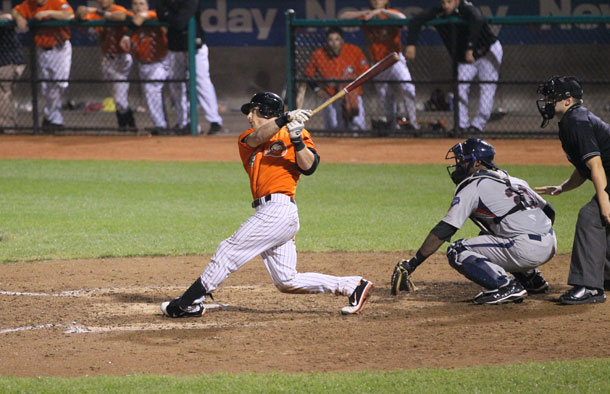 
(Central Islip, N.Y., Feb. 2, 2012)
–The Long Island Ducks today announced the signing of outfielder Kraig Binick. The Hicksville native returns for his second season with the Ducks and sixth in professional baseball.

“We’re thrilled to have Kraig back this season,” says Ducks president/general manager Michael Pfaff. “His bat and speed are tremendous assets to our lineup.”

Binick finished his first season on Long Island with an Atlantic League best .343 batting average, becoming just the second Duck in franchise history to lead the league in hitting (Henry Rodriguez, 2005). The outfielder also posted league-leading marks in stolen bases (42), stolen base percentage (.894) and on-base percentage (.429). Binick totaled 128 hits, 72 runs and 19 doubles in 106 games before hitting .360 with four RBI and four stolen bases during the playoffs.

The 26-year-old spent the first three years of his career in the Baltimore Orioles organization, reaching as high as Double-A Bowie in 2009. While with Independent Sussex (Can-Am) in 2010, he set a franchise record with 45 stolen bases in 91 games. For his minor league career, the NYIT alum has compiled a .295 batting average, a .376 on-base percentage and 132 stolen bases in 401 games. Binick was originally drafted by the Orioles in the 27th round of the 2007 amateur draft.

The Long Island Ducks are entering their 13th season of play in the Atlantic League of Professional Baseball and have led the league in attendance in each of their first 12 seasons. Opening Day is May 4. For further information, please visit www.liducks.com or call (631) 940-3825.