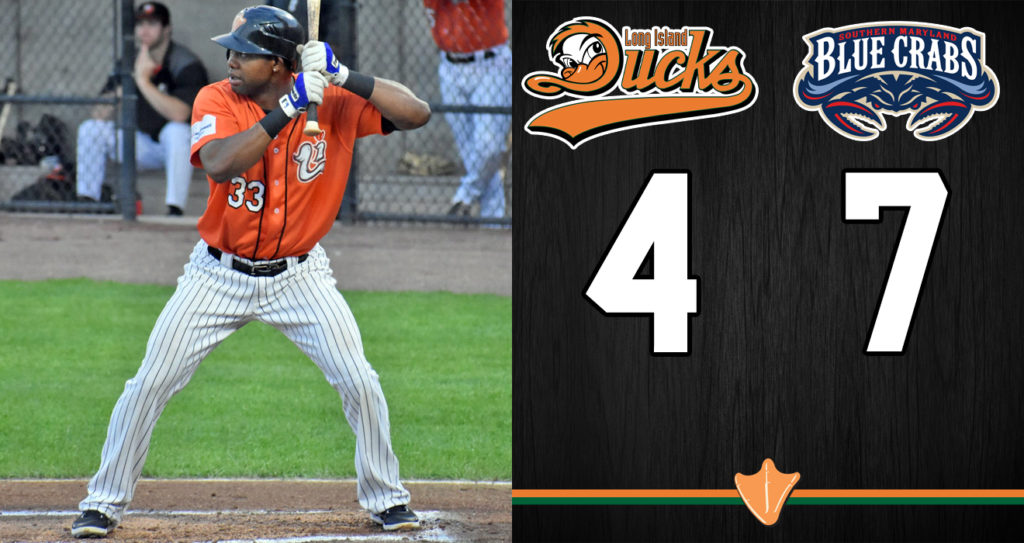 (Central Islip, N.Y., Sept. 14, 2022) – The Long Island Ducks were defeated by the Southern Maryland Blue Crabs 7-4 on Wednesday night in the middle game of a three-game series at Fairfield Properties Ballpark.

Southern Maryland struck for six runs on nine consecutive two-out hits in the first inning off Ducks starter Scott Harkin. A solo homer by Jared Walker, an RBI double by Zach Collier and RBI singles from Santiago Chirino, Ryan Haug, Michael Baca and Jack Sundberg did the damage. Long Island answered with a run in the bottom of the first on Alejandro De Aza’s RBI single to right field off Blue Crabs starter Alex Merithew.

The Blue Crabs restored their six-run lead in the fourth on David Harris’ RBI single to center. However, a wild pitch that plated Vladimir Frias and an RBI single to left by L.J. Mazzilli in the fifth closed the gap to 7-3. Joe DeCarlo launched a solo homer to left in the bottom of the sixth to make it a three-run ballgame.

Merithew (8-3) picked up the win, tossing five and two-thirds innings, allowing four runs on eight hits and three walks while striking out two. Harkin (10-8) took the loss, conceding seven runs on 14 hits over five innings with one strikeout. Endrys Briceno earned his 10th save of the season with a scoreless ninth inning.

The Ducks wrap up their three-game set with the Blue Crabs and their 2022 home schedule on Thursday night. Game time is slated for 6:35 p.m., with the Fairfield Properties Ballpark gates opening at 5:35 (5:20 for full season ticket holders). It’s Fan Appreciation Night, presented by Coca-Cola. One lucky fan will be selected during every inning of the ballgame to win a special prize in recognition of our fans’ terrific support all season long. It’s also a Thirsty Thursday! All fans will be welcome to visit the Duck Club restaurant/bar during the game, and fans can enjoy a special buy one, get one half-price offer on all BABE products in the ballpark as well. Right-hander Chris Cepeda (5-1, 4.13) toes the rubber for the Ducks against Blue Crabs righty Daryl Thompson (14-4, 3.49).