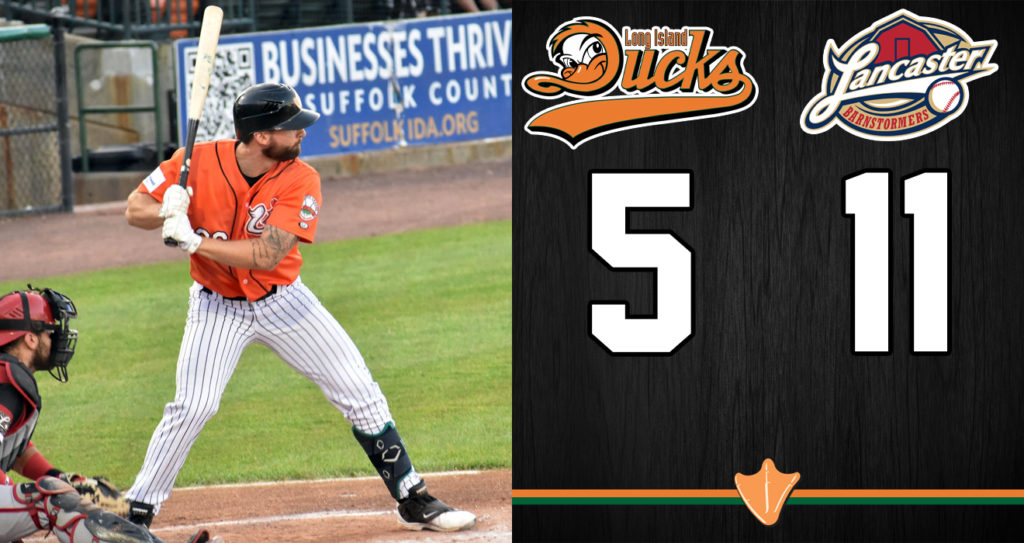 (Central Islip, N.Y., June 24, 2022) – The Long Island Ducks were defeated by the Lancaster Barnstormers 11-5 in 11 innings on Friday night in the opener of a four-game series at Fairfield Properties Ballpark.

Lancaster jumped out to a 4-0 lead in the first inning against Ducks starter Anderson DeLeon. Andretty Cordero’s bloop RBI single to right field and Colton Shaver’s three-run home run to left field did the damage. Long Island answered with a run in the second and three in the third off Barnstormers starter Cameron Gann to tie the game at four. RBI singles by Deibinson Romero, Sam Travis and Rusney Castillo plus and RBI double by Vladimir Frias highlighted the scoring.

Kelly Dugan’s long solo homer to center in the fifth put the Barnstormers in front 5-4. However, the Ducks tied the game again in the seventh when L.J. Mazzilli scored on a throwing error by Cordero. Neither side then dented home plate until the 11th inning when Lancaster exploded for six runs. Anthony Peroni’s RBI triple and RBI singles from Trace Loehr, Melvin Mercedes, Dugan and Anderson Feliz highlighted the inning.

The Ducks and Barnstormers continue their series on Saturday night with a single admission doubleheader. Game time for game one is slated for 5:05 p.m. with the ballpark gates opening at 4:30 for all fans. First pitch for game two is scheduled for 30 minutes after the completion of game one, and both games are slated for seven innings. Following the twin bill, all fans in attendance will be treated to a Fireworks Spectacular, presented by UBS Financial Services. It’s also a Lucky Seat Saturday, presented by Long Island MacArthur Airport. During the doubleheader, the Ducks will be selecting a lucky fan in the ballpark, who will win a free roundtrip for two to any of Breeze Airways’ 28 destinations. Right-hander Akeel Morris (3-4, 5.43) takes the mound for the Ducks in game one against Barnstormers righty Oscar De La Cruz (2-0, 5.22). Left-hander Cody Beckman (1-1, 6.38) toes the rubber for Long Island in game two against Lancaster righty Erik Manoah (1-1, 4.66).