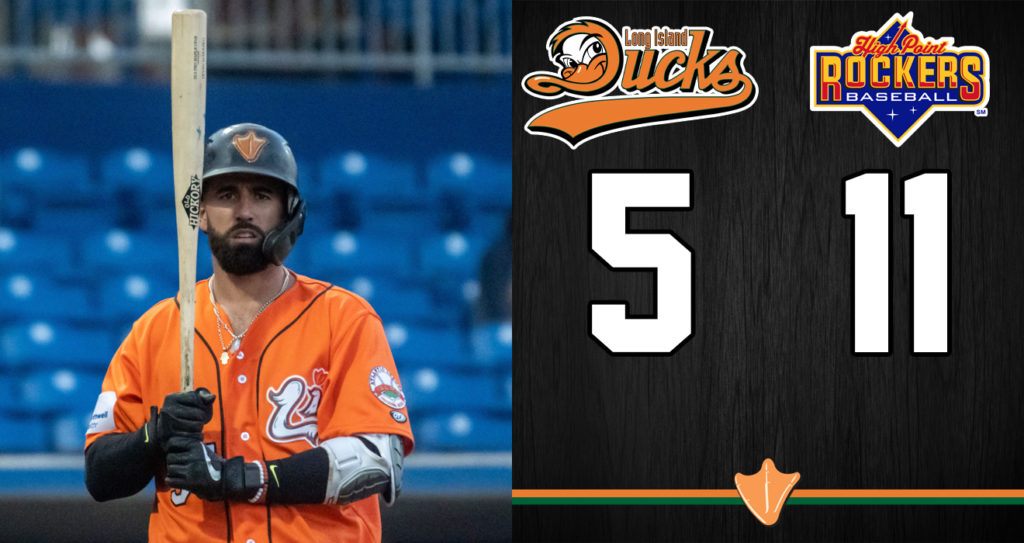 (High Point, N.C., May 4, 2022) – The Long Island Ducks were defeated by the High Point Rockers 11-5 on Wednesday night in the middle game of a three-game series at Truist Point.

High Point erupted for four runs in the first inning against Ducks starter Bennett Parry. Ben Aklinski’s two-run home run, a sacrifice fly off the bat of Michael Martinez and an RBI double by Johnny Field gave the hosts an early 4-0 lead. Field’s RBI single to right in the third gave the Rockers their fifth run of the night.

Three runs came home in the fifth for High Point on Tyler Ladendorf’s RBI double and Fields’ two-run homer to left. Long Island closed to within 8-3 in the sixth on Johnni Turbo’s two-run triple to right-center and L.J. Mazzilli’s RBI single up the middle off Rockers starter Andrew Church. However, a three-run homer to left-center by Ladendorf in the bottom of the inning restored the Rockers’ eight-run cushion.

Sam Travis hit a solo homer to left field, and Deven Marrero connected for an RBI single to left-center in the ninth. However, the Ducks were unable to complete the comeback.

Church (1-0) earned the win, tossing five and one-third innings of three-run ball, allowing four hits and one walk while striking out two. Parry (0-1) took the loss, conceding four runs on five hits in one inning of work.

The Ducks and Rockers wrap up their three-game set on Thursday night. First pitch is scheduled for 6:35 p.m. at Truist Point. Fans can follow all the action on the Long Island Ducks Broadcast Network. Live streaming HD video and audio will be available via BoxCast on LIDucks.com as well as on the Ducks official Facebook page and YouTube channel. Right-hander Scott Harkin (1-0, 5.00) toes the rubber for the Ducks against Rockers righty Brady Lail (1-1, 0.69).