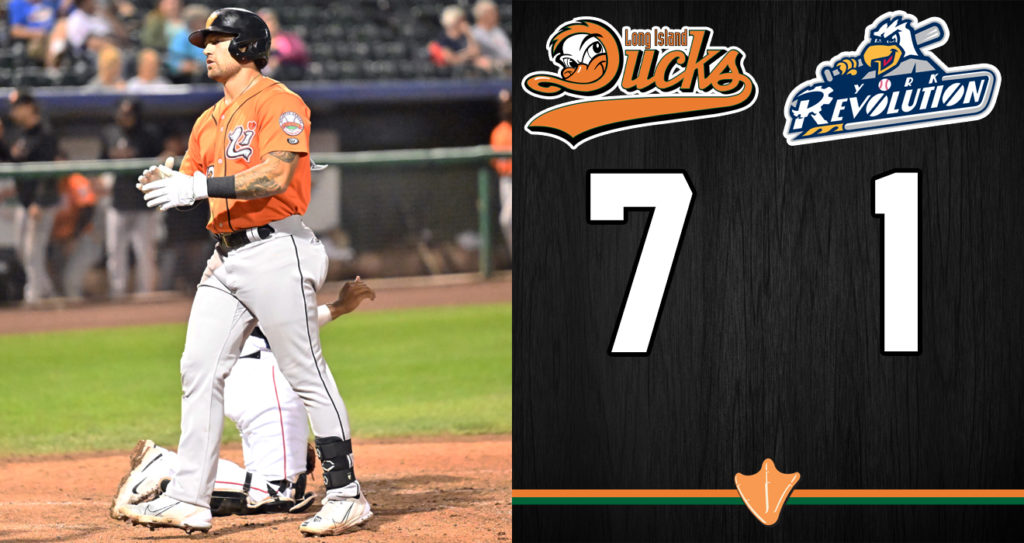 (York, Pa., Sept. 6, 2022) – The Long Island Ducks defeated the York Revolution 7-1 on Tuesday evening in the opening game of a four-game series from PeoplesBank Park.

Long Island jumped out in front 1-0 in the top of the fourth inning against York starter Eduardo Rivera on a two-out, run-scoring single produced by Joe DeCarlo as he plated Trevor Achenbach who was hit by a pitch with one man down. The Flock took a 5-0 advantage in the fifth as the visitors flexed their muscles courtesy of a pair of two-run home runs to left center field produced by L.J. Mazzilli and Jose Sermo.

The Ducks made it 6-0 in their favor in the sixth thanks to an RBI double to the opposite-field in left by Alejandro De Aza that scored Phil Caulfield after he tallied a base knock to begin the frame. Long Island finished their end of the scoring in the seventh with De Aza at it once again as the outfielder laced an RBI single which allowed Tzu-Wei Lin to cross the plate after he started the rally with a leadoff double into the right field corner. The lone Revolution run came in the eighth on a triple from Yefri Perez that drove in Melky Mesa.

De Aza collected three hits, including a pair of doubles, two RBIs and was hit by a pitch en route to the victory.

The Ducks and Revolution continue their four-game series on Wednesday when they play a single-admission doubleheader. First pitch in game one is scheduled for 5:00 p.m. at PeoplesBank Park. Fans can follow all the action on the Long Island Ducks Broadcast Network. Live streaming HD video and audio will be available via BoxCast on LIDucks.com as well as on the Ducks official Facebook page and YouTube channel. Right-hander Joe Iorio (10-4, 4.63) gets the start for the Ducks in the opening game of the twin-bill against Revolution left-hander Ben Herrick (0-3, 9.87). Righty Scott Harkin (9-7, 4.51 gets the nod for Long Island in the nightcap versus a pitcher to be announced for York.

Long Island returns home on Friday, September 9, to start another three-game set with the Staten Island FerryHawks. Game time is slated for 6:35 p.m., with the Fairfield Properties Ballpark gates opening at 5:35 (5:20 for full season ticket holders). The first 1,500 fans in attendance will receive QuackerJack and Scoop Posters, courtesy of Newsday. It’s also an EBBS Craft Beer/Fountain Hard Seltzer Takeover at the ballpark and an Angela’s Pizza Friday. Tickets for the game, and all Ducks games, are available by visiting the Fairfield Properties Ballpark box office, calling (631) 940-TIXX or CLICKING HERE.