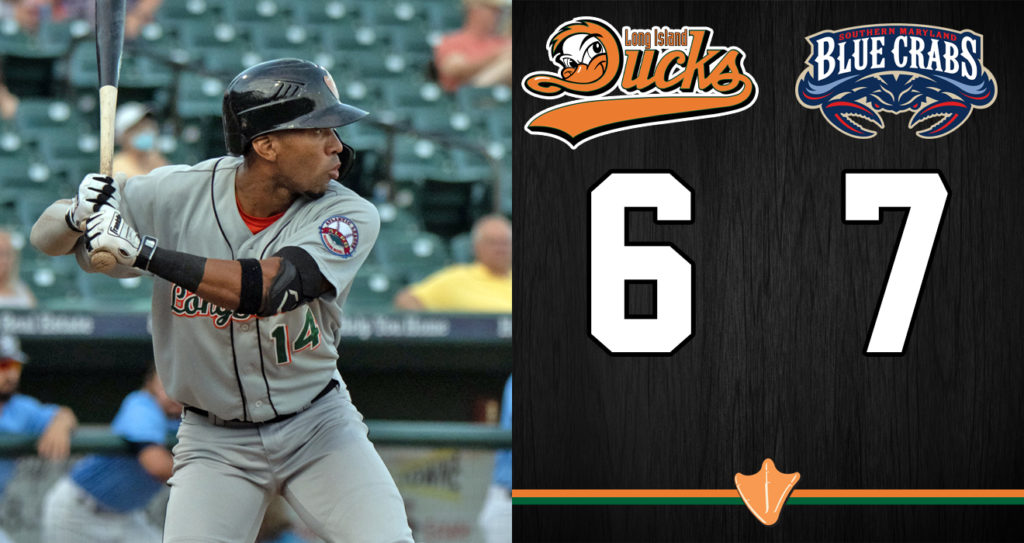 (Waldorf, Md., May 21, 2022) – The Long Island Ducks were defeated by the Southern Maryland Blue Crabs 7-6 in 11 innings on Saturday night in the middle game of a three-game series at Regency Furniture Stadium.

The Ducks grabbed two runs in the first inning on bases loaded walks by Sam Travis and Alejandro De Aza against Blue Crabs starter Denson Hull. Johnni Turbo extended the Ducks lead to three in the second with an RBI single to center field. Southern Maryland closed to within 3-2 in the bottom of the second on Braxton Lee’s RBI single to right and a wild pitch by Ducks starter Scott Harkin that plated Zach Collier.

L.J. Mazzilli pushed the Ducks lead up to two in the fifth with a solo home run over the left field fence. It stayed that way until the bottom of the eighth when the Blue Crabs rallied for four two-out runs off Ducks lefty Tyler Webb to take a 6-4 lead. David Harris’ RBI double, Alex Crosby’s RBI single and a two-run triple for Lee did the damage.

Long Island answered back in the ninth to tie the game at six against Blue Crabs righty Mat Latos on Joe DeCarlo’s RBI double to left-center and Turbo’s sac fly to center. It stayed that way until the bottom of the 11th when Collier scored from third on a two-out dropped third strike to win the game for Southern Maryland.

Neither starter factored into the decision. Harkin tossed seven innings of two-run ball, allowing seven hits and a walk while striking out two. Hull lasted five innings, yielding four runs (three earned) on five hits and three walks with three strikeouts. Endrys Briceno (3-0) earned the win with two scoreless innings of relief, while Chad Hockin (0-1) took the hard luck loss, conceding the winning run despite striking out two in two-thirds of an inning.

The Ducks and Blue Crabs wrap up their three-game set on Sunday afternoon. First pitch is scheduled for 2:05 p.m. from Regency Furniture Stadium. Fans can follow all the action on the Long Island Ducks Broadcast Network. Live streaming HD video and audio will be available via BoxCast on LIDucks.com as well as on the Ducks official Facebook page and YouTube channel. Right-hander Anderson DeLeon (2-1, 3.77) toes the rubber for the Ducks against Blue Crabs lefty Mitch Lambson (2-0, 3.72).