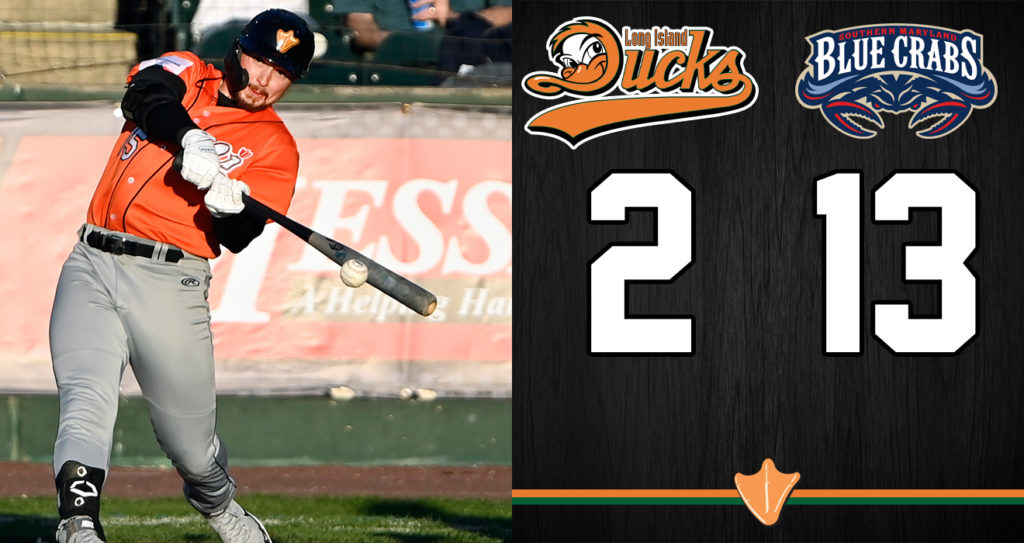 (Waldorf, Md., May 20, 2022) – The Long Island Ducks were defeated by the Southern Maryland Blue Crabs 12-2 on Friday night in the opener of a three-game series at Regency Furniture Stadium.

Southern Maryland struck for three runs in the opening inning against Ducks starter Akeel Morris on Jared Walker’s sacrifice fly to right field and David Harris’ two-run homer to left. A two-run double to center by Raul Shah in the second make it a 5-0 ballgame.

The Ducks closed to within three in the fourth inning on Deibinson Romero’s RBI double to left and Sam Travis’ RBI single to center off Blue Crabs starter Daryl Thompson. However, Braxton Lee’s run-scoring groundout in the sixth and Harris’ RBI single in the seventh restored Southern Maryland’s five-run lead at 7-2. A five-run seventh inning for the Blue Crabs then made it a 12-2 game.

Thompson (3-1) earned the win, tossing six innings of two-run ball, allowing five hits and one walk while striking out three. Morris (0-2) took the loss, conceding six runs on seven hits and two walks in five innings with one strikeout.

The Ducks and Blue Crabs continue their three-game set on Saturday night. First pitch is scheduled for 6:35 p.m. from Regency Furniture Stadium. Fans can follow all the action on the Long Island Ducks Broadcast Network. Live streaming HD video and audio will be available via BoxCast on LIDucks.com as well as on the Ducks official Facebook page and YouTube channel. Right-hander Scott Harkin (1-3, 6.58) takes the mound for the Ducks against Blue Crabs lefty Denson Hull (1-1, 0.68).