BLUE CRABS RALLY LATE AND WALK-OFF ON DUCKS IN WALDORF 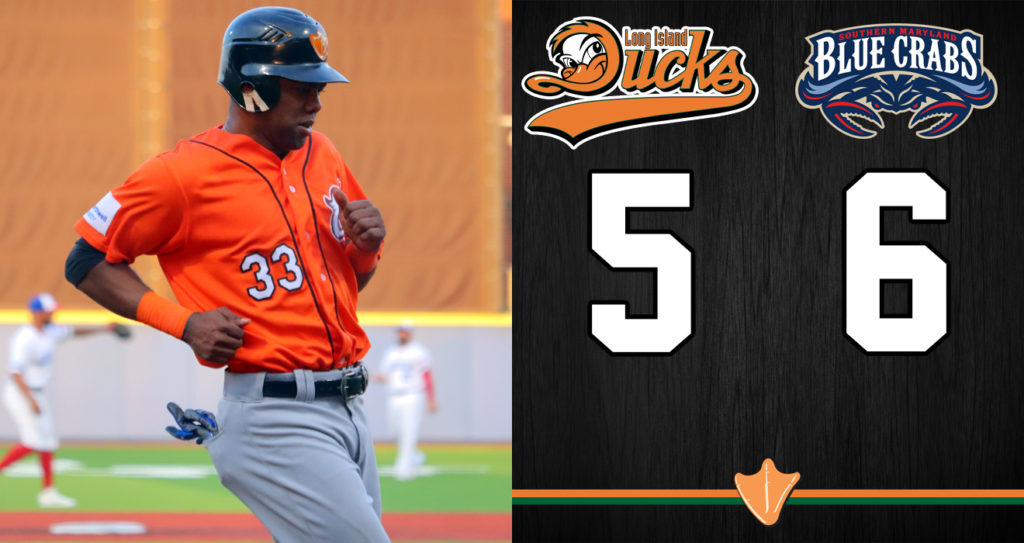 (Waldorf, Md., July 19, 2022) – The Long Island Ducks were defeated by the Southern Maryland Blue Crabs 6-5 on Tuesday night in the opener of a three-game midweek series from Regency Furniture Stadium.

Long Island jumped out in front 1-0 in the top of the third inning against Southern Maryland starting pitcher Eddie Butler courtesy of a two-out run-scoring single to the opposite field in left off the bat of Alejandro De Aza that plated Johnni Turbo after he led off the frame with a double. The Blue Crabs made it 2-1 in their favor in the last of the third versus Ducks starter Scott Harkin by way of a two-run home run over the Mini Monster in left field produced by Michael Wielansky.

The Flock went back out in front 4-2 in the fourth thanks to a bases clearing three-run double into the left field corner by L.J. Mazzilli that scored Joe DeCarlo, Vladimir Frias, and Turbo. The visitors made it 5-2 in the fifth as Deibinson Romero plated De Aza with an RBI base knock. Trailing 5-4 in the seventh, Southern Maryland tied the ballgame at five on an RBI base hit from Wielansky against Nick Goody. In the last of the ninth, David Harris flared a single just in front of leftfielder Sam Travis off Edubray Ramos that enabled Zach Collier to cross the plate with the winning run which gave the Blue Crabs the walk-off victory.

Neither pitcher factored in the game’s final outcome, as Harkin gave up four runs on nine hits (one home run) in five innings pitched, walking one and striking out four, while Butler surrendered five runs on 11 hits across six innings on the mound, walking two while striking out six. Ramos (2-1) suffered the loss, allowing one run on two hits in two-thirds of an inning pitched, striking out one. Mat Latos (3-2) tallied the win with a scoreless inning of relief on one strikeout. De Aza had three hits for Long Island, along with an RBI, run scored, and stolen base.

The Ducks and Blue Crabs continue their three-game set on Wednesday evening. First pitch is scheduled for 6:35 p.m. from Regency Furniture Stadium. Fans can follow all the action on the Long Island Ducks Broadcast Network. Live streaming HD video and audio will be available via BoxCast on LIDucks.com as well as on the Ducks official Facebook page and YouTube channel. Right-hander Joe Iorio (6-3, 4.15) takes the mound for Long Island against Southern Maryland righty Daryl Thompson (9-2, 3.63)