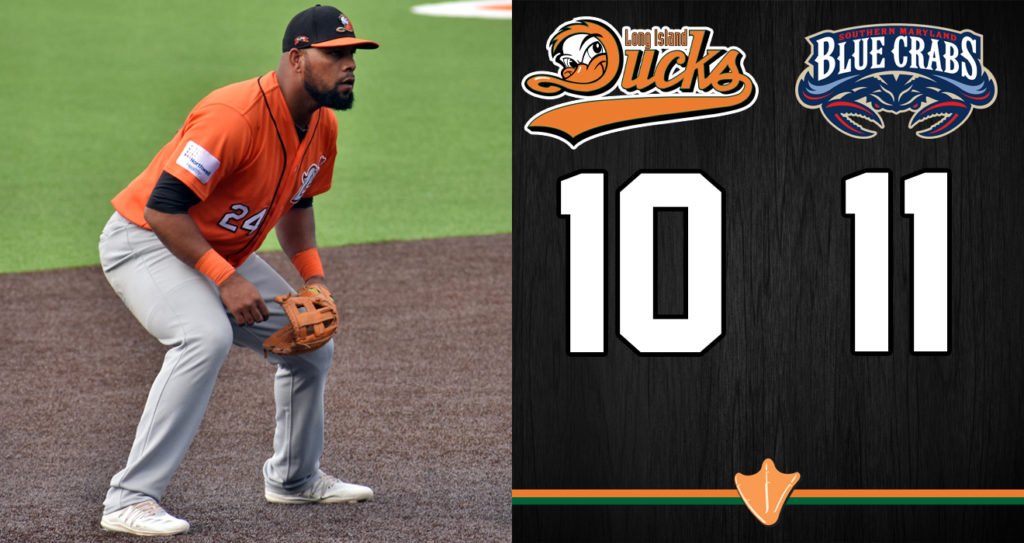 (Waldorf, Md., July 21, 2022) – The Long Island Ducks were defeated by the Southern Maryland Blue Crabs 11-10 on Thursday night in the final game of a three-game midweek series at Regency Furniture Stadium.

Long Island sent 11 batters to the plate in the top of the first inning against Southern Maryland starting pitcher Adrian Cook, scoring seven times, highlighted by an RBI double off the bat of Alejandro De Aza that scored L.J. Mazzilli after he led off the game with a walk, a run-scoring base knock by Deibinson Romero which plated De Aza, and a two-run single courtesy of Joe DeCarlo that drove in Sam Travis and Romero. The Ducks made it 8-1 in their favor in the second on a ground ball double play with the bases loaded and nobody out that enabled De Aza to cross the plate.

The Blue Crabs slowly clawed their way back into the contest little by little versus Ducks starter Bennett Parry, cutting the deficit to 8-3 in the second by way of a two-run home run from Ian Yetsko. Southern Maryland tied the ballgame at eight apiece in the fifth with five more runs and took a 9-8 advantage one frame later on an Alex Crosby groundout that scored Yetsko with the go-ahead run. The Flock tied the game in the sixth and jumped back out in front 10-9 in the eighth with both runs crossing the plate on infield singles from Romero and Vladimir Frias respectively. In the home half of the eighth, Southern Maryland went ahead for good with a pair of runs off Nick Goody on a ground ball double play hit into by Michael Falsetti and a two-out RBI single from Yetsko. Endrys Briceno closed the game out in the ninth for his seventh save of the season as the Blue Crabs completed the sweep of the Ducks in Waldorf.

Neither starting pitcher factored in the game’s final outcome. Parry allowed three runs on five hits (one home run) in three innings pitched, walking three and striking out two. Cook surrendered seven runs (six earned) on four hits in just one-third of an inning on the mound, walking three while striking out one. Goody (0-2) was tagged with the loss after giving up two runs on two hits in two-thirds of an inning, walking two batters in the process. Patrick Baker (4-1) tallied the win in relief despite giving up one run on two hits in one inning pitched, walking and striking out a pair of batters. Travis led the offensive attack for the Flock by reaching base in all five plate appearances with three hits, two runs scored, and two walks.

Long Island returns home on Friday night to begin a three-game set with the Southern Maryland Blue Crabs. Game time is scheduled for 6:35 p.m., with the Fairfield Properties Ballpark gates opening at 5:35 (5:20 for full season ticket holders). The first 1,500 fans in attendance will receive Ducks Rally Towels, courtesy of Merch & Swag. It’s also an Angela’s Pizza Friday! A player on the Blue Crabs will be designated as the K-Man. If he strikes out during the game, all fans can show their game ticket to enjoy a special offer throughout the rest of the weekend at Angela’s Pizzeria of Islip. Right-hander Ryan Meisinger (2-1, 3.93) gets the start versus Blue Crabs righty Alex Merithew (1-1, 4.08).