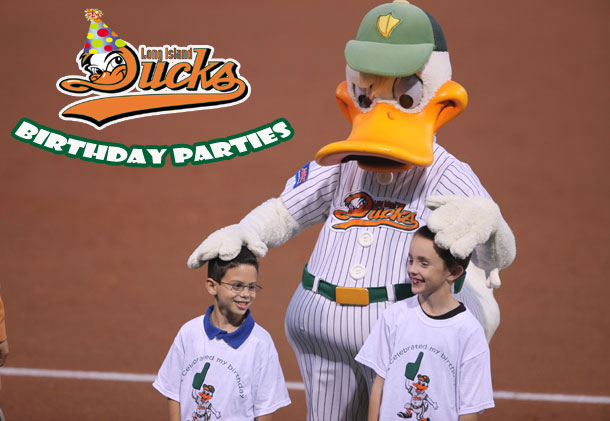 Celebrate your birthday in style with the Ducks


(Central Islip, N.Y., Jan. 5, 2012) – The waiting is over Ducks fans! The always popular Carvel Birthday Party Packages are on sale NOW. Fans interested in celebrating their special day at the ballpark can do so by calling the group sales department at (631) 940-3825.
“Birthday parties with the Ducks are the ultimate experience for any child,” says director of group sales John Wolff. “It’s a fun, unique, affordable way for children to celebrate their big day, and that’s what makes these packages so popular.”
In each of the club’s 12 seasons, birthday party packages have been the most popular outing among fans of all ages. Each package includes 10 box seats to the game, 10 souvenir logo baseballs, one logo ball autographed by a Ducks player for the birthday child, and a souvenir T-shirt commemorating the occasion for just $265! Food and beverage for your group are included, and additional tickets are available for purchase for groups larger than 10.

The birthday child’s name will be announced over the ballpark’s public address system and displayed on the scoreboard, and best of all, he or she will get to stand on top of the dugout while every fan in the ballpark sings “Happy Birthday.” Having this special day commemorated at the Duck Pond is a sure way to make this year’s birthday unforgettable – plus, you won’t have to clean up!

The Long Island Ducks are members of the Atlantic League of Professional Baseball and play their home games at Bethpage Ballpark in Central Islip, N.Y. The Ducks have led the Atlantic League in attendance for 12 consecutive seasons. For season ticket or advertising information, visit www.liducks.com or call 631-940-DUCK.
###