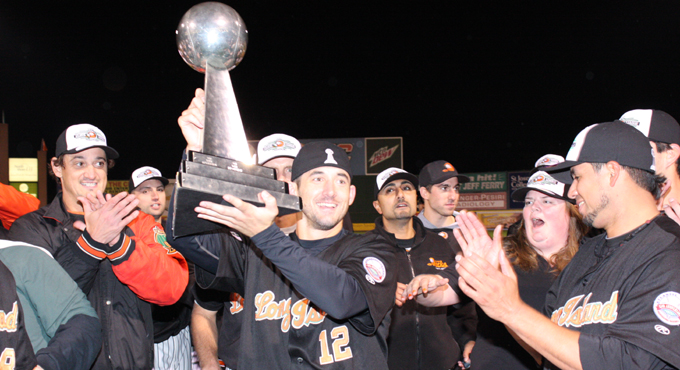 “Dan has been a vital part of our success over the past two seasons,” says Ducks president and general manager Michael Pfaff. “His clutch hitting and superb defense will be a key ingredient to our club continuing our winning ways.”

earned his first Atlantic League All-Star Game selection in 2012 and was also named the First Team Postseason All-Star shortstop. During the regular season, the 28-year-old collected three homers, 56 RBI, 17 doubles and a team-high six triples in 127 games. He also had two waddle-off hits during the season, including a game-winning single on July 1 against . The victory secured the First Half Liberty Division Championship, giving the Ducks their eighth postseason berth in the past nine years.

During the playoffs, the native compiled three doubles, six RBI and nine runs scored in 10 games. His biggest hits included a game-winning three-run double in Game Two of the Atlantic League Championship Series and the championship-winning walk-off bunt single in the ninth inning of Game Five. For his efforts, he was named the Championship Series MVP, becoming the second player in franchise history to earn the honor (Justin Davies, 2004).

was also a member of the Ducks in 2011, hitting .283 with 40 RBI, 15 doubles and four triples during the regular season before going 3-for-5 with a run batted in over four postseason games. The alum has played six seasons of professional baseball and was originally drafted by the Washington Nationals in the 14th round of the 2007 amateur draft.