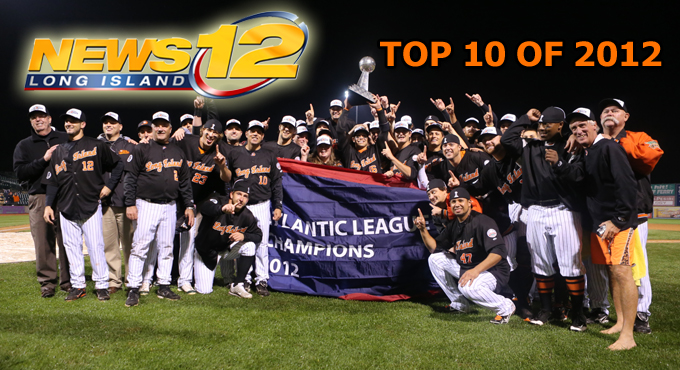 (Central Islip, N.Y., Jan. 2, 2013) – News 12 Long Island has chosen their Top 10 local sports moments of 2012, and the Ducks’ Atlantic League championship victory has been selected as the Number Three moment of the year.

CLICK HERE to watch the full Top 10 show (Ducks revealed at 8:35 in video)

The only two stories that were ranked higher than the Ducks’ victory were the New York Giants’ victory in Super Bowl XLVI and the announcement that the New York Islanders would be moving to the Barclays Center in Brooklyn. Here is the complete Top 10 list:

The Ducks earned their second Atlantic League title with a 5-4 waddle-off win over the Lancaster Barnstormers on Sunday, October 7 at Bethpage Ballpark. It marked the first time the team has won the championship since 2004 and the first time ever winning it on their home field. Dan Lyons was named the Championship Series MVP after earning two game-winning hits in the series, including a walk-off bunt single in the ninth inning of the deciding Game Five.