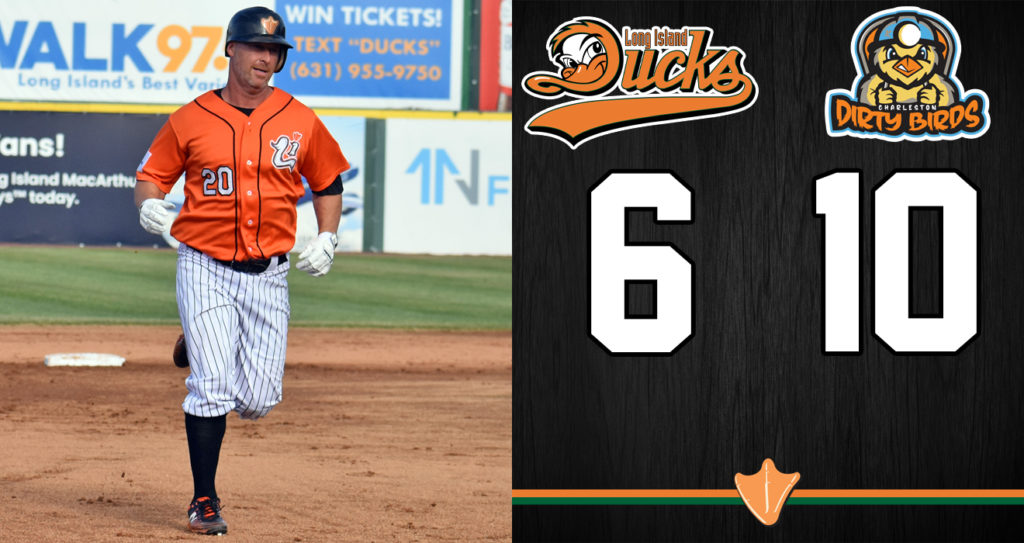 (Central Islip, N.Y., Aug. 14, 2022) – The Long Island Ducks were defeated by the Charleston Dirty Birds 10-6 on Sunday evening in the rubber game of a three-game series at Fairfield Properties Ballpark.

Lew Ford launched the Ducks in front early with a two-run home run to left field in the first inning off Dirty Birds starter Joe Testa. Charleston answered with four runs in the second off Ducks starter Joe Iorio to take a 4-2 lead. RBI doubles by Anfernee Seymour and Nick Heath plus a two-run homer to left by Alfredo Gonzalez did the damage. Joe DeCarlo’s RBI single to left-center in the bottom of the frame trimmed the Ducks deficit to one.

Yovan Gonzalez increased the Dirty Birds lead to 6-3 in the third with a two-run homer to left. Long Island got both runs back in the bottom of third on Carlos Castro’s RBI single and DeCarlo’s run-scoring fielder’s choice. Ford then tied the game at six in the fourth with a solo homer over the left-center field fence.

Charleston took the lead back in the sixth on a sac fly to center off the bat of Seymour, and Devon Torrence scored on a balk in the seventh to make it an 8-6 game. Yovan Gonzalez’s two-run single to right in the ninth rounded out the scoring.

Iorio did not factor into the decision but lasted three innings, giving up six runs on eight hits and three walks with two strikeouts. Testa (1-5) picked up the win despite allowing six runs over five innings, yielding eight hits and a walk while striking out five. Chris Cepeda (3-1) suffered the loss, conceding an unearned run on one hit and one walk over two innings with one strikeout.

The Ducks continue their homestand on Tuesday night when they open a three-game series against the Staten Island FerryHawks. Game time is slated for 6:35 p.m., with the Fairfield Properties Ballpark gates opening at 5:35 (5:20 for full season ticket holders). It’s a Triple Play Tuesday! If the Ducks turn a triple play during the game, one lucky fan will win $25,000. Simply sign up prior to first pitch at the Ticket Kiosk on the main concourse to be eligible. Right-hander Scott Harkin (8-6, 4.70) gets the start for the Ducks against FerryHawks righty Hector Guance (3-5, 6.92).