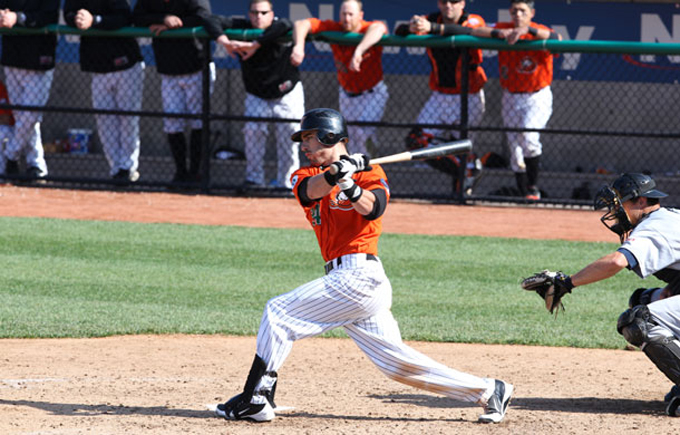 (Central Islip, N.Y., May 22, 2012) – Long Island Ducks outfielder Kraig Binick will be chatting live with fans on Thursday, May 24 at 2:00 p.m. Fans can access the Newsday.com live chat on Thursday and set up an e-mail reminder today by CLICKING HERE.

The Hicksville native is currently in his second season with the Ducks. This year, he has compiled a .265 batting average along with one homer, 11 RBI, 13 runs and six stolen bases in 23 games. In 2011, Binick won the Atlantic League batting title by posting a .343 batting average and also led the league in on-base percentage (.429), stolen bases (42) and stolen base percentage (.894). The 27-year-old was selected to play in the Atlantic League All-Star game and earned postseason First Team All-Star honors.

Binick is a graduate of Chaminade High School in Mineola and played his collegiate baseball at New York Institute of Technology. During his senior season, the outfielder led the school in batting average (.406), hits (84), runs (58), RBI (35), doubles (18), triples (5) and stolen bases (32). His efforts earned him the distinction of being named NCAA Division I Independent Baseball Player of the Year, and he set the school record for career hits with 270, surpassing assistant coach Ray Giannelli’s total of 254.

The Long Island Ducks are members of the Atlantic League of Professional Baseball and play their home games at Bethpage Ballpark. For further information, call (631) 940-DUCK or visit at