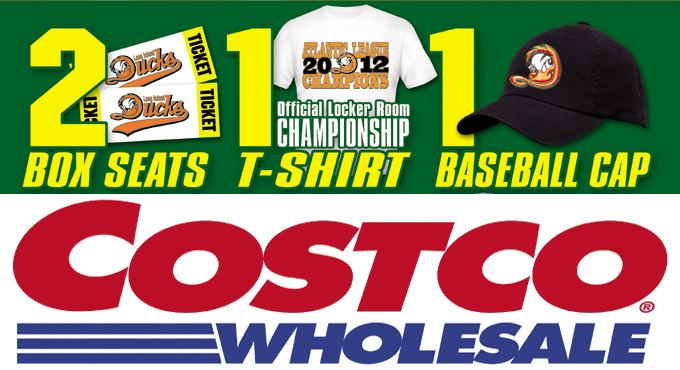 Ducks partner with COSTCO for ticket and merchandise package

(Central Islip, N.Y., Mar. 18, 2013) – The Atlantic League champion Long Island Ducks today announced that they have teamed up with COSTCO this season to present the “Long Island Ducks Fan Pack.” This offer, for COSTCO shoppers exclusively, combines tickets and team apparel for the first time in one convenient package, all at a discounted price.

“The Ducks and COSTCO are excited to team up to offer a great value for fans,” says Ducks president and general manager Michael Pfaff. “This package exhibits the natural synergy between our brands and our desire to offer value to customers.”

Each “Long Island Ducks Fan Pack” comes with a voucher redeemable for two box seats to any 2013 Ducks game at Bethpage Ballpark, subject to availability. The package also includes a voucher good for one official locker room championship t-shirt, the same one worn by the Ducks after winning the 2012 Atlantic League championship, and one Ducks baseball cap. All of this is included for just $39.99, a savings of up to 39{fed8f40cd2a68a8c30440cd209af7e0b5f3e2c8d6275da881303f7d48df340f1} off the box office and Waddle In Shop price.

Fans can purchase this exciting offer at all five COSTCO locations on Long Island, including Commack, Holbrook, Melville, Nesconset and Westbury. All you need to do is pick up a “Long Island Ducks Fan Pack” voucher at the Ducks display inside COSTCO and bring it to the register. There, you will receive a ticket voucher, redeemable at the Bethpage Ballpark box office, and a merchandise voucher, redeemable at the Waddle In Shop at Bethpage Ballpark.