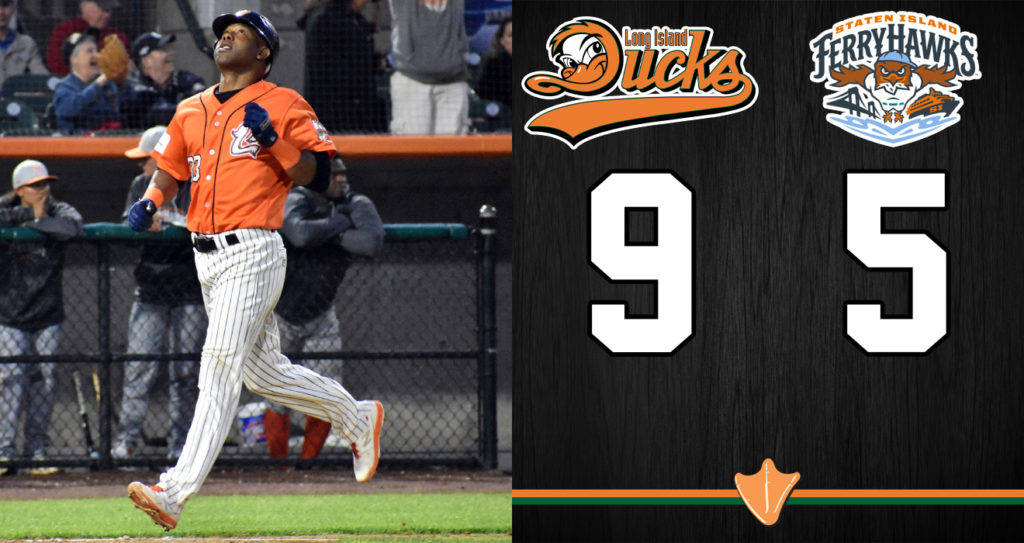 Mariel Bautista gave Staten Island a 1-0 lead in the second inning with a leadoff solo home run to left field off Ducks starter Joe Iorio. Dustin Woodcock answered in the third with a two-run homer to right field off FerryHawks starter Matt Solter to put the Ducks in front 2-1. Deven Marrero added an RBI single to center in the fourth to give Long Island a two-run cushion.

It stayed that way until the sixth when Alejandro De Aza launched a two-out grand slam to right-center field, widening the Ducks lead to 7-1. Bautista hit another homer in the seventh to close the gap to 7-2, but Sam Travis laced a two-out, two-run single to left in the eighth to make it a 9-2 lead for the Flock. Staten Island rallied for three runs in the ninth on a solo homer by Ricardo Cespedes, an RBI double by Javier Betancourt and an RBI single by Joseph Monge, but they couldn’t pull even.

The Ducks and FerryHawks continue their three-game series on Saturday night. Game time is slated for 6:35 p.m., with the Fairfield Properties Ballpark gates opening at 5:35 (5:20 for full season ticket holders). Following the game, all fans in attendance will be treated to a Fireworks Spectacular. It’s also a Lucky Seat Saturday, presented by Long Island MacArthur Airport. During the game, one lucky fan will win a free roundtrip for two to any of Breeze Airways’ 28 destinations. Left-hander Stephen Tarpley (0-2, 7.94) takes the mound for the Ducks against FerryHawks righty Jordan Simpson (0-2, 4.85).