DE AZA’S NIGHT IS GRAND IN VICTORY OVER LANCASTER 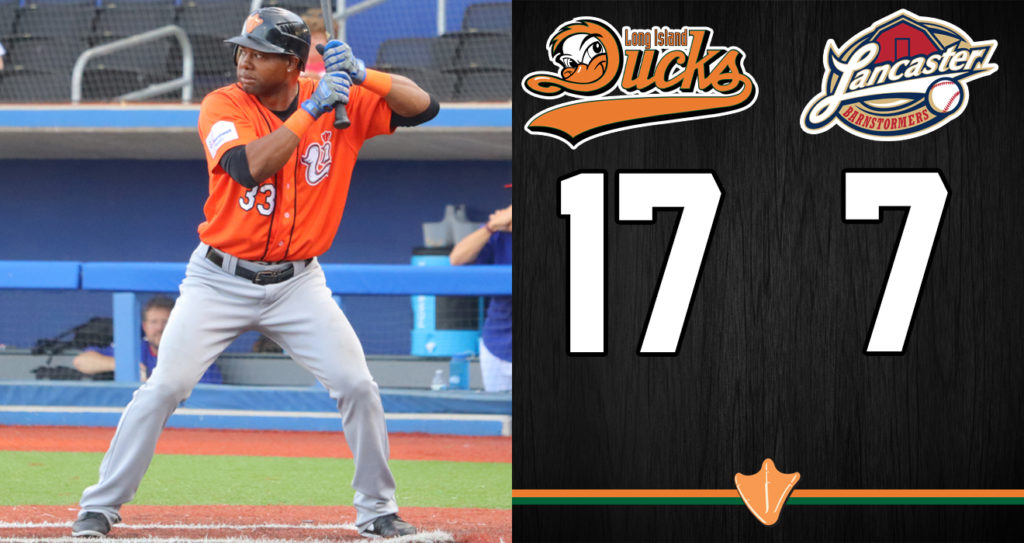 (Lancaster, Pa., August 9, 2022) – The Long Island Ducks defeated the Lancaster Barnstormers 17-7 in seven innings on Tuesday evening in the opening game of a three-game midweek series from Clipper Magazine Stadium.

Long Island jumped out in front 4-0 in the top of third inning against Lancaster starting pitcher Oscar De La Cruz thanks to a leadoff home run to right center field off the bat of Vladimir Frias and run scoring doubles produced by Alejandro De Aza, Deibinson Romero, and Dustin Woodcock. The Barnstormers got to within 4-3 one half inning later versus Ducks starter Scott Harkin on an RBI double by Trace Loehr and a pair of run scoring base knocks courtesy of Melvin Mercedes and Andretty Cordero.

The Flock took a 7-3 advantage in the fourth on an RBI base hit by Lew Ford and a two-run single from Carlos Castro. The visitors made it 10-3 in their favor in the fifth highlighted by a two RBI base hit from Phil Caulfield and a run scoring single by Romero. After Lancaster got to within 10-7, Long Island scored the final seven runs of the ballgame as De Aza belted his second grand slam home run of the season over the right center field fence in the sixth with three more runs crossing the plate in the seventh on a Joe De Carlo RBI double, a run scoring base knock from Matt Chamberlain, and an RBI fielder’s choice by pinch-hitter Johnni Marti.

Harkin tallied a no-decision after allowing seven runs on 11 hits across four and two-thirds innings pitched, walking and striking out two. De La Cruz (6-2) was tagged with the loss, surrendering six runs on five hits (one home run) in just three and one-third innings of work, walking three and striking out two. Jose Jose (2-0) struck out the only batter he faced in Loehr en route to the victory. De Aza and Chamberlain led the way with three hits apiece, while De Aza recorded the first five RBI game by a Long Island batter this season.

The Ducks and Barnstormers continue their three-game set on Wednesday night. First pitch is scheduled for 6:30 p.m. at Clipper Magazine Stadium. Fans can follow all the action on the Long Island Ducks Broadcast Network. Live streaming HD video and audio will be available via BoxCast on LIDucks.com as well as on the Ducks official Facebook page and YouTube channel. Right-hander Sandy Baez (3-2, 3.05) gets the nod for the Flock against Barnstormers righty Gray Fenter (1-0, 0.90).