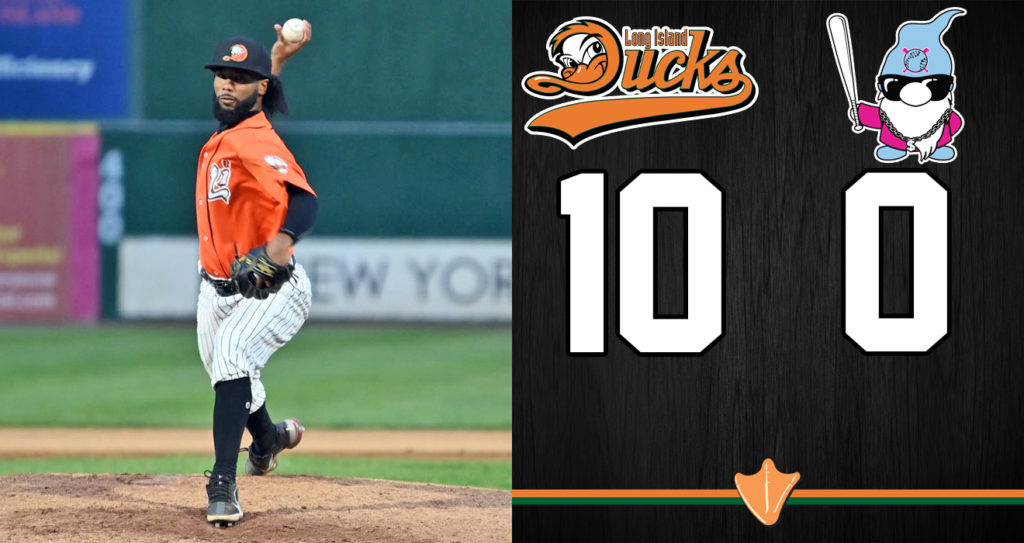 (Central Islip, N.Y., June 18, 2022) – The Long Island Ducks shut out the Wild Health Genomes 10-0 on Saturday night in the middle game of a three-game series before a past-capacity crowd of 6,744 at Fairfield Properties Ballpark.

The Ducks erupted for four runs in the first inning against Genomes righty Robby Scott. RBI singles from Alejandro De Aza, Rusney Castillo and Joe DeCarlo along with a throwing error that scored L.J. Mazzilli highlighted the frame.

It remained 4-0 until the seventh when a three-spot extended Long Island’s advantage to seven. Sam Travis’ two-run double to right and a passed ball that scored Travis did the damage. Three more runs came home in the bottom of the eighth on a pair of wild pitches and Deibinson Romero’s RBI groundout to second, rounding out the scoring.

Ducks starter Anderson DeLeon (3-1) was brilliant in a complete game shutout. The right-hander allowed just one hit and two walks over nine innings while striking out nine batters. Scott (3-5) took the loss, giving up four runs on 10 hits and two walks over six innings with seven strikeouts.

Castillo had three hits and an RBI to lead the Ducks offensively. Six other Ducks picked up two hits apiece, with Travis driving in and scoring two runs. Mazzilli and De Aza each scored three times.

The Ducks and Genomes wrap up their three-game set on Sunday afternoon. Game time is slated for 1:35 p.m., with the Fairfield Properties Ballpark gates opening at 12:35 (12:20 for full season ticket holders). Prior to the game, the Ducks will be hosting a Father’s Day Barbecue. Fans can purchase special packages which include a ticket to the game and a 90-minute all-you-can-eat barbecue from 12:05 to first pitch. Visit LIDucks.com/fathersday for more information. It’s also a Sunday Family Funday, presented by Bethpage Federal Credit Union! Prior to the game, fans will be invited down for a Catch on the Field from 12:40 to 1:00. After the game, fans of all ages are also invited to take part in Kids Run the Bases. Right-hander Akeel Morris (2-4, 6.19) toes the rubber for the Ducks against Genomes righty Aaron Blair (0-3, 11.42).