DIRTY BIRDS STRIKE LATE TO EVEN SERIES WITH DUCKS 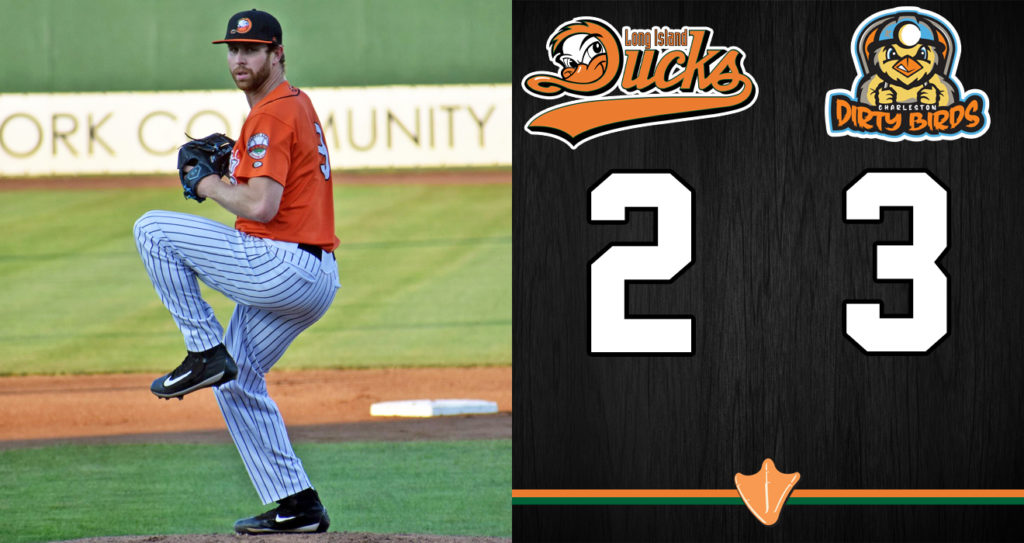 (Central Islip, N.Y., Aug. 27, 2022) – The Long Island Ducks were defeated by the Charleston Dirty Birds 3-2 on Saturday night in the middle game of a three-game series before a past-capacity crowd of 7,063 at Fairfield Properties Ballpark.

Charleston opened the scoring in the third inning on a sacrifice fly to left field off the bat of Alfredo Gonzalez. Long Island answered with two runs off Dirty Birds starter Kit Scheetz in the bottom of the frame on Alejandro De Aza’s run-scoring groundout to second and Carlos Castro’s RBI single to left.

It stayed that way until the seventh when the Dirty Birds took the lead back at 3-2 on Yovan Gonzalez’s sac fly to right and Scott Burcham’s bloop RBI single to right. Long Island put the tying and winning runs on in the ninth but could not tie it.

The Ducks and Dirty Birds wrap up their three-game set on Sunday evening. Game time is slated for 5:05 p.m., with the Fairfield Properties Ballpark gates opening at 4:05 (3:50 for full season ticket holders). It’s Jewish Heritage Night, presented by the Jewish Community Centers of Long Island. The first 1,000 fans in attendance will receive Clear Tote Bags. It’s also a Sunday Family Funday, presented by Bethpage Federal Credit Union. Prior to the game, fans will be invited down for a Catch on the Field from 4:10 to 4:30. After the game, fans of all ages are also invited to take part in Kids Run the Bases. Right-hander Chris Cepeda (3-1, 3.50) toes the rubber for the Ducks against Dirty Birds lefty Derrick Adams (6-7, 4.52).