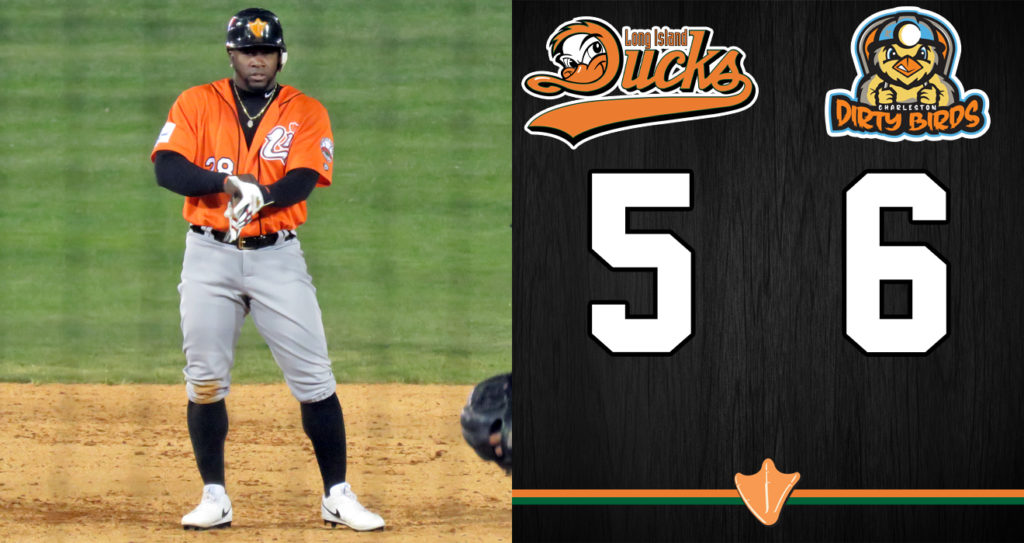 (Charleston, W.Va., April 27, 2022) – The Long Island Ducks were defeated by the Charleston Dirty Birds 6-5 on Wednesday night in the middle game of a three-game series at Appalachian Power Park.

Rusney Castillo launched an opposite-field solo home run in the first inning off Dirty Birds starter Jordan Stephens to give the Ducks an early 1-0 lead. Dustin Woodcock doubled the lead to two in the second when he blooped a two-out RBI single into left field. Castillo then scored on a throwing error by Mike Hart in the third, increasing the Ducks advantage to 3-0.

The Dirty Birds closed to within 3-2 in the bottom of the third on back-to-back RBI doubles from Juan Perez and Nick Longhi off Ducks starter Brett Kennedy. Deven Marrero responded with a two-out RBI double to left-center in the fourth to push the lead back up to two. However, a two-out, two-run triple to right-center by Hart in the sixth tied the game at four.

Joe DeCarlo restored the Ducks lead in the seventh with a two-out RBI single up the middle. It stayed that way until the bottom of the ninth when Charleston scored two runs to walk off with a 6-5 win. Scott Kelly’s RBI single and Longhi’s solo homer did the damage.

Neither starter factored into the decision. Kennedy pitched five innings of two-run ball, allowing six hits and one walk while striking out three. Stephens lasted five innings, giving up four runs (three earned) on four hits and two walks with two strikeouts. Kit Scheetz (2-0) earned the win with two scoreless innings of relief, allowing a hit and a walk while striking out three. Tyler Webb (0-1) took the loss, conceding two runs on three hits in two-thirds of an inning.

Castillo led the Flock with three hits, an RBI and two runs. DeCarlo added two hits, an RBI, two runs and a walk.

The Ducks and Dirty Birds wrap up their three-game set on Thursday morning. First pitch is scheduled for 10:35 a.m. at Appalachian Power Park. Fans can follow all the action on the Long Island Ducks Broadcast Network. Live streaming HD video and audio will be available via BoxCast on LIDucks.com as well as on the Ducks official Facebook page and YouTube channel. Left-hander Bennett Parry (0-0, 0.00) toes the rubber for the Ducks against Dirty Birds southpaw Joe Testa (0-0, 7.20).