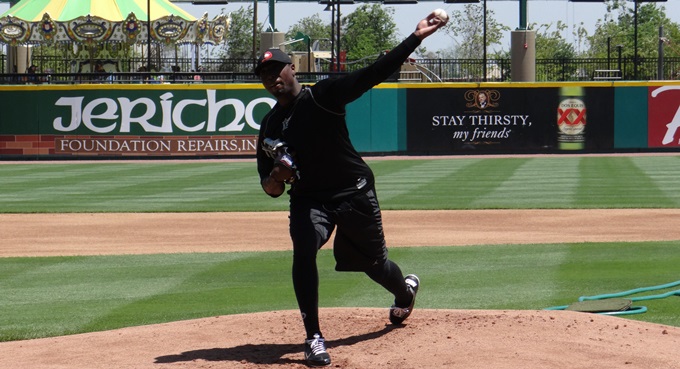 (Sugar Land, Texas, April 19, 2013) – Ducks left-handed pitcher Dontrelle Willis threw a simulated game on Friday afternoon at Constellation Field as he prepares for his first regular season start in a Ducks uniform. The southpaw threw four innings of 20 pitches apiece under bright sunshine and temperatures in the 60’s. The continued work by Willis has put him on schedule to start the team’s home opener on Friday, April 26 at Bethpage Ballpark against the Sugar Land Skeeters.

“I felt great out there,” said Willis. “I appreciate the guys coming out here, taking the time out of their day and helping me get my work in. I liked my sinker. It was moving nicely, and I just had fun out there.”

Under the watchful eye of manager Kevin Baez and pitching coach Steve Foucault, Willis threw to hitters Gabe Suarez and Matt Fleishman. The outing was the 31-year-old’s second time on the mound since the Ducks arrived in Sugar Land. He threw two scoreless innings as the starter on Tuesday night in Long Island’s Spring Training game against the Skeeters.

“He has good arm speed, and his ball has some life to it, meaning he has good movement on his ball,” noted Baez. “We’re just trying to get his endurance up a little bit and build up his innings. He’s going to throw a side session on Sunday and Tuesday as well.”

Willis’ first start for the Flock will take place for in the 2013 home opener on Friday, April 26 when the Ducks host the Skeeters. First pitch is set for 7:05 p.m., with the Bethpage Ballpark gates opening at 6:05. The first 1,500 fans in attendance will receive Replica Championship Rings, courtesy of P.C. Richard and Son. Prior to the game, the Ducks will also host a Championship Ring and Banner Raising Ceremony to celebrate the team’s 2012 Atlantic League championship. Fans are asked to be in their seats by 6:30 to enjoy this special moment in Ducks history.

Tickets for the game and all regular season home games are now on sale. Fans can purchase their tickets by visiting the Bethpage Ballpark box office, calling 631-940-TIXX or by CLICKING HERE.