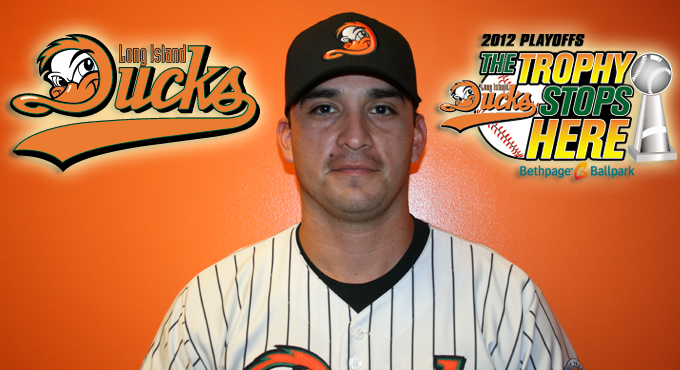 (Central Islip, N.Y., Aug. 28, 2012) – The Long Island Ducks today announced that they have acquired outfielder Lee Cruz from the Kansas City T-Bones of the American Association in exchange for a player to be named later. Cruz begins his first season with the Ducks and in the Atlantic League.

“Lee has proven to be a terrific hitter throughout his career,” says Ducks manager Kevin Baez. “We’re confident he will strengthen our lineup as we continue our run to the championship.”

Cruz split time this season with the T-Bones and Yucatan in the Mexican League. In 70 combined games, he compiled a .345 batting average with 15 home runs, 55 RBI and 24 doubles. A year ago, he earned American Association Player of the Year honors with the Amarillo Sox after batting .344 with 18 home runs and 94 RBI, good for second in the league. The 29-year-old was also second in the league in hits (144) while finishing first in total bases (242), doubles (38) and extra base hits (59).

A native of Florida, Cruz has played in the Chicago White Sox and Houston Astros organizations, reaching as high as Triple-A. After getting drafted by the White Sox in the 10th round of the 2006 amateur draft, he was selected by Baseball America as the Best Pure Hitter and Best Late-Round Pick among the team’s draft class. Cruz played collegiate baseball at the University of Tampa and was named the 2006 Division II College World Series MVP. He also earned Division II Player of the Year honors that season and broke the school’s record for career home runs, which was previously held by former Yankee Tino Martinez, with 26.