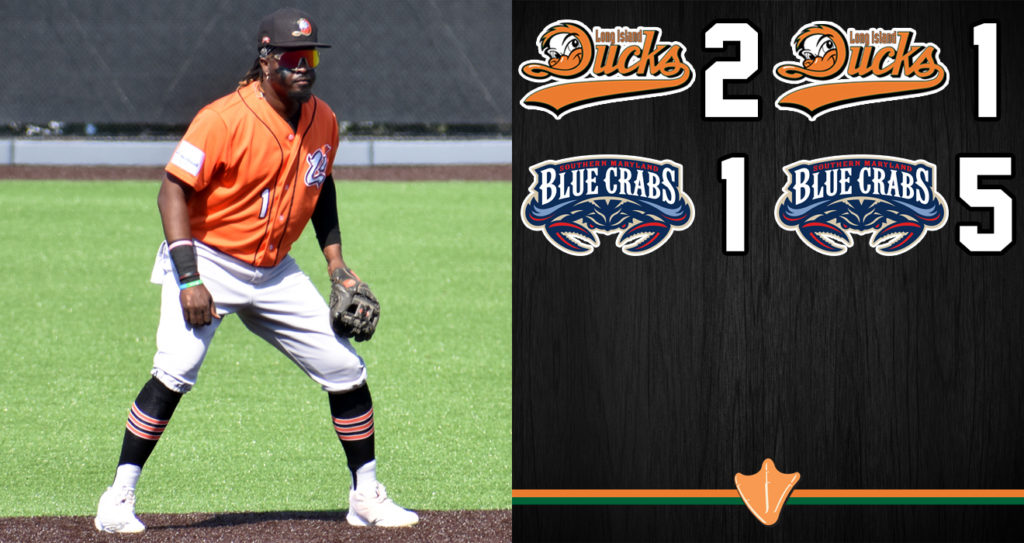 Vladimir Frias put the Ducks ahead in game one with a run-scoring single to right field in the top of the second inning off Blue Crabs starter Adrian Cook that plated Carlos Castro after he was hit by a pitch with two men away. The Blue Crabs tied the ballgame at one a half-inning later versus Long Island starter Ryan Meisinger courtesy of a sacrifice fly from Braxton Lee.

The Flock went back out in front 2-1 in the third as Sam Travis drove home Phil Caulfield with an RBI base knock off the Mini Monster in left field for what proved to be the winning run.

Meisinger (3-2) picked up the victory, giving up just one run on three hits across five innings pitched, walking five and striking out four. Cook (0-1) suffered the loss, allowing two runs (one earned) on five hits in six innings of work, walking one while also striking out four. Jose Jose fired two scoreless frames out of the bullpen for his first save in a Ducks uniform. Caulfield and Frias led the way with a pair of hits each.

Long Island took a 1-0 lead in the fourth inning of game two on Joe DeCarlo’s RBI double into the left field corner against Blue Crabs starter Eddie Butler that plated Castro after he drew a free pass earlier in the frame. Southern Maryland scored three times in the last of the fourth off Ducks starter Stephen Tarpley thanks to an RBI double from Braxton Lee, a run-scoring single by David Harris, and an RBI groundout produced by Jared Walker. The home team would add a pair of insurance runs in the fifth for a 5-1 cushion when Harris drove in a run with an infield single and Alex Crosby reached on a fielding error by Tarpley.

Butler (10-2) was victorious after firing five and one-third innings of one-run ball on eight hits, walking two and striking out four. Tarpley (4-5) was tagged with the loss, surrendering five runs (four earned) on seven hits over five innings on the mound, walking two while striking out five. Travis, DeCarlo, and Deibinson Romero had two hits apiece in the defeat.

Long Island and Southern Maryland wrap-up their three-game weekend series on Sunday afternoon. First pitch is scheduled for 2:05 p.m. at Regency Furniture Stadium. Fans can follow all the action on the Long Island Ducks Broadcast Network. Live streaming HD video and audio will be available via BoxCast on LIDucks.com as well as on the Ducks official Facebook page and YouTube channel. Right-hander Akeel Morris (4-8, 6.23) gets the nod for the Ducks against Blue Crabs righty Daryl Thompson (10-2, 3.67)