DUCKS AND REVS SPLIT TWIN-BILL IN THE KEYSTONE STATE 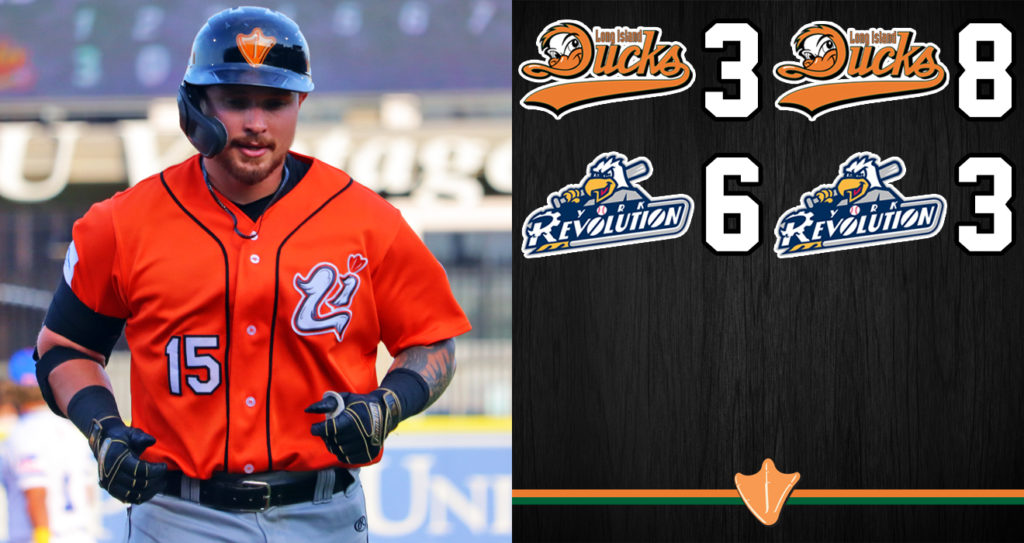 (York, Pa., September 7, 2022) – The Long Island Ducks split a single-admission doubleheader with the York Revolution on Wednesday at Peoples Bank Park, dropping game one 6-3 while winning the nightcap 8-3.

The Ducks jumped out in front 2-0 in game one in the top of the third inning off Revolution starter Ben Herrick courtesy of an RBI double by Alejandro De Aza and a run-scoring base knock produced by Deibinson Romero. The Revolution took the lead 3-2 a half-inning later versus Long Island starter Joe Iorio by way of a solo home run from Troy Stokes Jr. and a two-run blast by Nellie Rodriguez. The second big fly from Rodriguez made it 6-2 Revs as the designated hitter belted a three-run shot in the fifth. The visitors got to within 6-3 in the sixth thanks to an RBI fielder’s choice from Trevor Achenbach but would not get any closer as Jim Fuller shut the door in the seventh for his 18th save of the season.

Long Island took a 2-0 lead in the second inning of game two against York starter Austin Mora on a solo home run to right from Dustin Woodcock and an RBI single by Phil Caulfield. In the next two frames, the Flock added three more runs on bases loaded free passes issued to Matt Chamberlain, Woodcock, and DeCarlo. Tzu-Wei Lin’s first home run in a Ducks uniform hit the top of the Arch Nemesis in left and bounced over the wall in the fifth to make it 6-0 Long Island. York got to within 6-3 against Ducks starter Scott Harkin on run-scoring singles from Stokes Jr. and Elmer Reyes along with a sacrifice fly off the bat of Telvin Nash. Chamberlain’s RBI base knock and Woodcock’s second walk with three Ducks on the pond put the game out of reach and gave the Flock a split of the twin-bill

Harkin (10-7) was victorious after tossing five innings and allowing three runs on nine hits, walking one and striking out three. Mora (0-1) was tagged with the loss, surrendering five runs (four earned) on five hits (one home run) over three and one-third innings on the mound, walking six while striking out two. De Aza led the way offensively with three hits en route to the victory, increasing his league leading batting average to .343, eight points ahead of Lancaster’s Andretty Cordero (.335).

The Ducks and Revolution wrap up their four-game series on Thursday evening. First pitch is scheduled for 6:30 p.m. at PeoplesBank Park. Fans can follow all the action on the Long Island Ducks Broadcast Network. Live streaming HD video and audio will be available via BoxCast on LIDucks.com as well as on the Ducks official Facebook page and YouTube channel. Right-hander Chris Cepeda (5-1, 3.51) gets the start for the Ducks against Revolution left-hander Josh Norwood (0-0, 12.00).

Long Island returns home on Friday, September 9, to start another three-game set with the Staten Island FerryHawks. Game time is slated for 6:35 p.m., with the Fairfield Properties Ballpark gates opening at 5:35 (5:20 for full season ticket holders). The first 1,500 fans in attendance will receive QuackerJack and Scoop Posters, courtesy of Newsday. It’s also an EBBS Craft Beer/Fountain Hard Seltzer Takeover at the ballpark and an Angela’s Pizza Friday. Tickets for the game, and all Ducks games, are available by visiting the Fairfield Properties Ballpark box office, calling (631) 940-TIXX or CLICKING HERE.