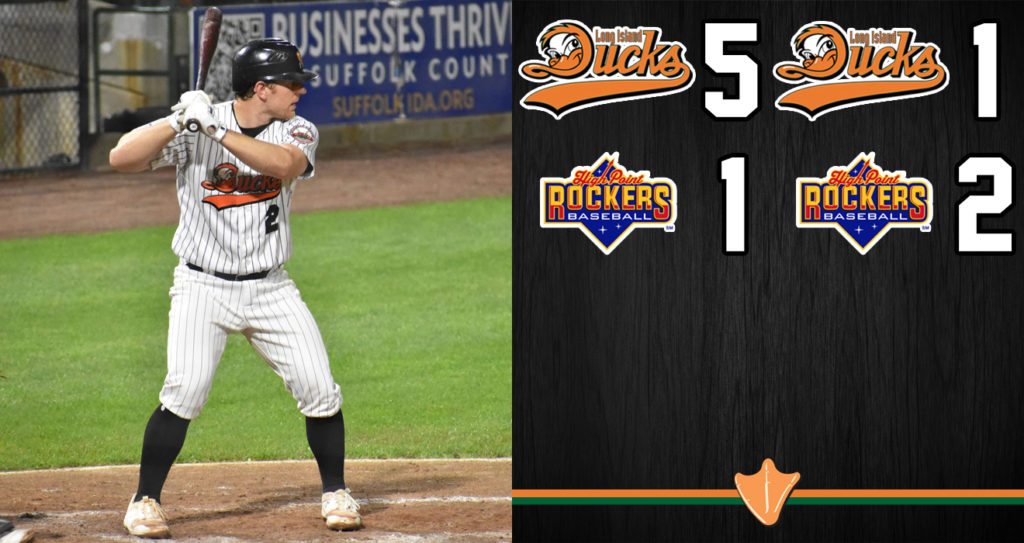 Alejandro De Aza put the Ducks ahead early in game one with a first inning sacrifice fly to left field off Rockers starter Nick Evangelista. It stayed that way until the fifth when a leadoff solo home run to left by Joe DeCarlo doubled the Ducks lead to two.

A three-run sixth inning ballooned Long Island’s advantage to 5-0. Sam Travis’ RBI double down the left field line and Deibinson Romero’s two-run homer to left did the damage. High Point scratched out a run in the ninth on Michael Russell’s RBI groundout to second.

Ducks starter Stephen Tarpley (2-3) earned the win, tossing five scoreless innings, allowing four hits and two walks while striking out three. Evangelista (0-1) took the loss, conceding three runs on three hits and a walk in five and one-third innings with one strikeout. Nick Goody picked up his second save of the season with two innings of relief, giving up a run on two hits with three strikeouts.

Long Island opened the scoring in game two as well on Vladimir Frias’ RBI single to right in the second inning off Rockers starter Ivan Pineyro. The Ducks led until the top of the sixth when the Rockers took a 2-1 lead on Zander Wiel’s RBI double down the right field line and Quincy Latimore’s sac fly to left off Ducks starter Scott Harkin.

Pineyro (1-0) picked up the win, tossing five innings of one-run ball, allowing four hits and two walks while striking out six. Harkin (4-5) took the loss, surrendering two runs on five hits and three walks in five and one-third innings with five strikeouts. Ryan Dull collected his first save of the season with a scoreless seventh inning.

The Ducks continue their homestand on Friday night when they open a four-game series against the Lancaster Barnstormers. Game time is slated for 6:35 p.m., with the Fairfield Properties Ballpark gates opening at 5:35 (5:20 for full season ticket holders). Following the game, all fans in attendance will be treated to a Fireworks Spectacular. It’s also an Angela’s Pizza Friday! A player on the Barnstormers will be designated as the K-Man, and if he strikes out during the game, all fans can show their game ticket to enjoy a buy one slice, get on free offer throughout the rest of the weekend at Angela’s Pizzeria of Islip. Right-hander Anderson DeLeon (3-1, 2.96) gets the start for the Ducks against Barnstormers righty Cameron Gann (4-4, 4.95).