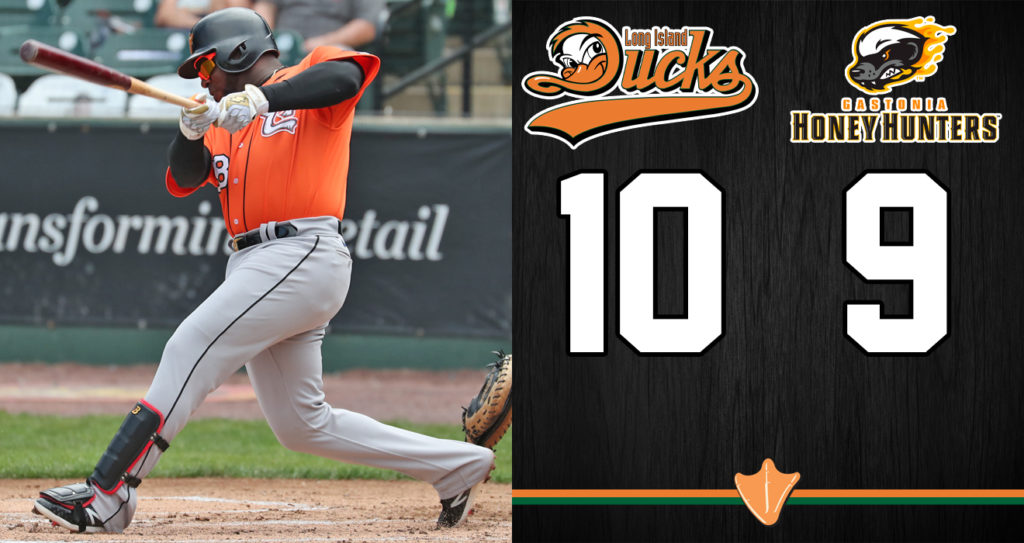 (Gastonia, N.C., June 1, 2022) – The Long Island Ducks defeated the Gastonia Honey Hunters 10-9 in 11 innings on Wednesday evening in the second of a three-game midweek series at CaroMont Health Park.

The Ducks took a 2-0 lead in the first inning on an RBI fielder’s choice off the bat of L.J. Mazzilli and a run-scoring base knock produced by Austin Rei against Honey Hunters starter Michael Gunn. Gastonia tied the game in the last of the first by way of an RBI triple from Joseph Rosa and a run-scoring groundout from Emmanuel Tapia versus Long Island starter Anderson DeLeon.

The Flock went back out in front 4-2 in the second thanks to a bases loaded walk issued to Mazzilli and an RBI single from Alejandro De Aza. The Honey Hunters would tie the game at four on a Jake Skole solo home run to the opposite-field in left and a run-scoring base knock from Emmanuel Tapia. A three-run home run by De Aza in the fourth gave the visitors a 7-4 cushion, his second such big fly in as many nights. Rusney Castillo’s two-run single gave Long Island some insurance at 9-4, but Gastonia scored five unanswered runs to tie the game at nine. Jake Zarrello’s two-out, pinch-hit RBI single to right off losing pitcher Sam Bordner (6-3) scored Castillo from second with the winning run as the Ducks came away with the triumph, making a winner out of Chris Cepeda (1-0).

DeLeon registered a no-decision, allowing four runs on seven hits (one home run) in five innings pitched, walking three and striking out four. Gunn also did not factor in the game’s final outcome, giving up seven runs on eight hits (one home run) over three innings on the mound while walking five batters.

Castillo led the offensive attack with Long Island’s first four-hit game of the season and his first multi-RBI performance of the 2022 campaign.

The Ducks and Honey Hunters conclude their three-game set on Thursday night. First pitch is scheduled for 6:15 p.m. at CaroMont Health Park. Fans can follow all the action on the Long Island Ducks Broadcast Network. Live streaming HD video and audio will be available via BoxCast on LIDucks.com as well as on the Ducks official Facebook page and YouTube channel. Right-hander Akeel Morris (0-4, 8.13) gets the start for the Ducks against lefty John Anderson (3-3, 2.54) for the Honey Hunters.