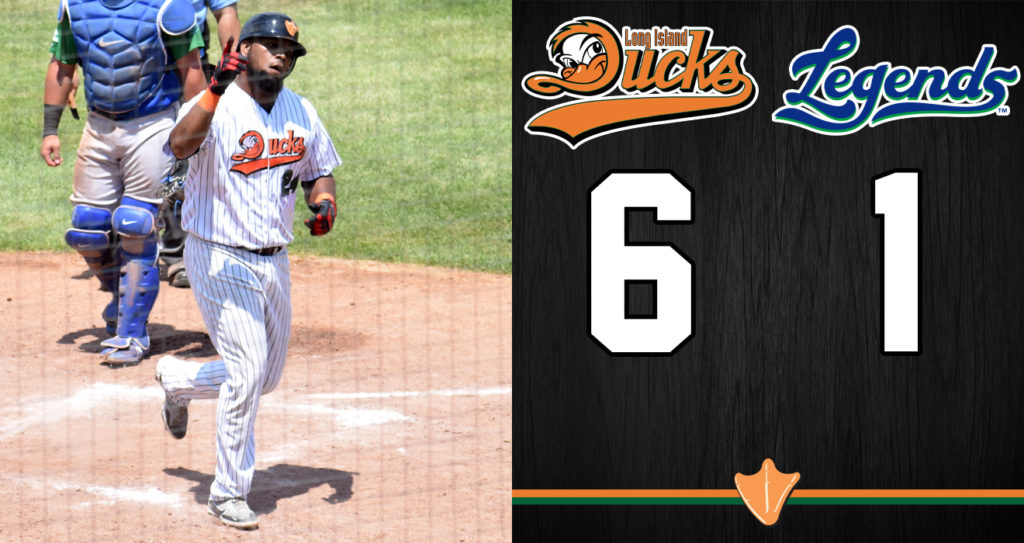 The Ducks struck for two runs in the opening inning on RBI singles from L.J. Mazzilli and Deibinson Romero off Legends starter Wes Albert. The Legends closed to within 2-1 in the second on Montrell Marshall’s RBI single to left off Ducks starter Bennett Parry. However, the Ducks got the run right back in the bottom of the frame on Alejandro De Aza’s RBI fielder’s choice.

Long Island extended the lead to 5-1 in the fourth on a two-out, two-run single to left by Joe DeCarlo. A solo home run over the left field wall by Romero in the sixth rounded out the scoring.

Parry did not factor into the decision but lasted two and two-thirds innings, allowing a run on three hits with three strikeouts. Ryan Meisinger (2-1) earned the win with two and one-third scoreless innings of relief, yielding a hit and three walks while striking out four. Albert (0-2) took the loss, giving up five runs (four earned) on eight hits and five walks over four innings with five strikeouts.

Romero led the Flock offensively with three hits, two RBIs and a run scored. Mazzilli added two hits, an RBI and a run. Long Island’s bullpen combined to pitch six and one-third scoreless innings of relief, allowing just one hit and three walks while striking out 10 and retiring the final 16 Legends batters to come up to the plate.

The Ducks begin a six-game road trip on Friday night when they open a three-game series against the Wild Health Genomes. First pitch is scheduled for 6:35 p.m. at Wild Health Field. Fans can follow all the action on the Long Island Ducks Broadcast Network. Live streaming HD video and audio will be available via BoxCast on LIDucks.com as well as on the Ducks official Facebook page and YouTube channel. Right-hander Anderson DeLeon (3-3, 4.70) gets the start for the Ducks against Genomes righty Dustin Beggs (5-4, 5.45).