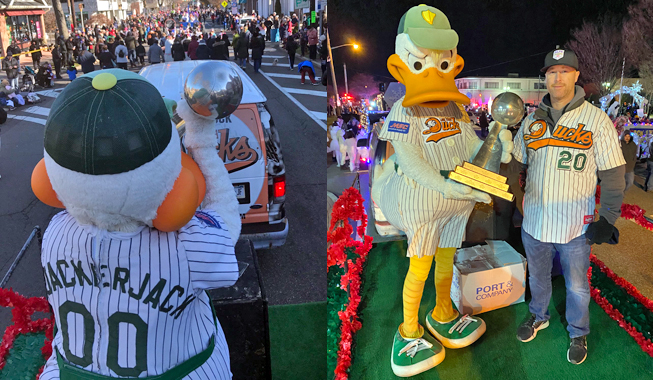 (Central Islip, N.Y., Nov. 30, 2019) – The Long Island Ducks took to the streets on Saturday to take part in annual holiday parades in both Sayville and Patchogue.

Nine-time Best Long Island Mascot QuackerJack was in attendance at both parades, and fans lined Main Street in both towns to wave at and cheer on their favorite Duck. QJ held up the the 2019 Atlantic League Championship trophy along the parade route for all to see.

Also on the Ducks float at both parades was Ducks outfielder and hitting coach Lew Ford. The 10-year Ducks veteran and former big leaguer greeted the hundreds of parade-goers and joined QuackerJack in throwing out t-shirts to those in the crowd. Members of the Ducks front office staff marched alongside the float and handed out special ticket offers to fans at the parades.